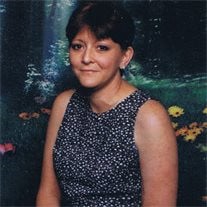 Angela passed away Tuesday , April 25, 2012 at the Golden Living Center in Neligh, NE. Angela Jaylene Allen was born on September 11, 1969 to Leon and Bethany (Vowel) Payne at Clinton, Oklahoma. She was baptized in Heilbronn West Germany.... View Obituary & Service Information

The family of Angela Jaylene Allen created this Life Tributes page to make it easy to share your memories.

Send flowers to the Allen family.