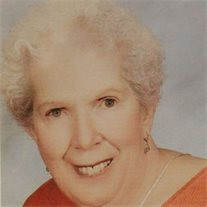 Funeral Services for Antoinette "Anne" Marie Pinc age 82 of Neligh, Ne were at 7:00 p.m.; Thursday, November 17, 2011 at Calvary Bible Church in Neligh, with Pastor Nathan Dick, Officiating. Music was provided by Alice Busshardt, Organist and Pam Mack, Stephanie Dick, and Nathan Dick. Pallbearers were Mark Lenihan, Joey Lehihan, Maria Lenihan, Michael Odell, keely Odell, and Liam Odell. Visitation was an hour before the Service. Burial will be 2:30 p.m. Wednesday, November 23, 2011 at Fort Snelling National Cemetery in Minneapolis, MN. Antoinette went to be with Jesus on Friday, November 11, 2011 at Madonna Rehabilitation Hospital in Lincoln, Ne. Anne was born in Brooklyn, NY on June 20, 1929, to Biagio and Maria (Lanza) Sarno. She was the youngest of nine children. On September 2, 1962, she married William Pinc of St. Paul, MN at St. Francis Xavier Church in Brooklyn, NY. The couple resided in St. Paul, MN where they had two daughters. In 2005 Anne moved to northeast NE. All who knew Anne saw her love for Jesus. This love for the Lord and Savior sustained her throughout life and gifted her with a boldness to share the hope of Jesus. Loved ones who remain are her two daughters and sons-in-law, Elizabeth and Michael Odell of Clearwater, NE and Lisa and Mark Lenihan of Wayne, NE; four grandchildren, Keely and Liam Odell, Joseph and Maria Lenihan; one sister, Fay Tupa of Hutchinson, MN and one brother, Nick (Laurette) Sarno of Scottsdale, AZ. Also included are family and friends whose lives were touched by her. She is preceded in death by her parents, her husband, five sisters, Christine, DiSalvio, Mildred Beckinella, Terry Ciofrone, Rose Heffernan, Connie Cortese, and one brother, Tommy Sarno. Job 42:5 My ears had heard of You but now my eyes have seen You. (NIV)

The family of Antoinette "Anne" Marie Pinc created this Life Tributes page to make it easy to share your memories.