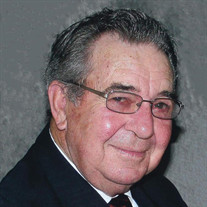 Funeral Service for Arliss Clinton age 79 of Clearwater, NE will be 10:30 a.m. Saturday, August 7, 2021 at Cornerstone Bible Church in Orchard, NE with Pastor Troy Watson, Officiating. Burial will be in Clearwater Cemetery with Military Rites by Clearwater American Legion Post #267 and Legion Riders. Visitation will be Friday 5:00 p.m. to 7:00 p.m. at Snider Memorial Funeral Home in Clearwater, NE. Art passed away on Saturday, July 31, 2021 at Antelope Memorial Hospital in Neligh, NE. Condolences may be directed to the family at www.snidermemorialfh.com Arliss R. Clinton was born on March 2, 1942, to Hillery O. and Rose (Berens) Clinton at Spencer, NE. He graduated from Spencer High School in the Class of 1959 and attended college at Southern State in Springfield SD. While working at Mastercraft Furniture in Omaha, he met the love of his life, Shirley Tinsley who was studying nursing at Methodist Nursing School. Their first years dating were spent enjoying life with friends and family in Omaha and on October 19, 1963, they were united in marriage in Clearwater, Nebraska. With the Vietnam war raging, Art enlisted in the United States Air Force February 6, 1966. After basic training in Texas, Shirley joined him in Denver for his specialized training, and then to Columbus AFB, Mississippi, before he was deployed to Guam, and then eventually to Thailand. He attained the rank of Staff Sargent and received multiple commendations for his work as a “Airspace Photography System Repairman''. He chose to leave the service and was honorably discharged on February 6, 1970, to pursue an opportunity in Nebraska. Art and Shirley returned to Clearwater Nebraska, where, with Shirley’s father and Mother, built a family farm. Art tolerated the pigs, loved his cattle, and dreamt of the big fish. They raised three boys, and enjoyed a wonderful life, with so many friends in a community they enjoyed. He quietly followed Jesus, worshipping on Sundays with his family. He retired from farming, 2007 and enjoyed traveling, dancing, reading, fishing, and serving as a member of the Clearwater American Legion Post #267, but most of all, he enjoyed his time with family and friends, especially his grandchildren. Art is survived by his wife of 57 year, Shirley; Sister-Shirley Bailey, three sons, Brian (Tina), Matthew (Elizabeth) and Jason (Josephine) 10 grandchildren, Morghan (Cliff), Jonathan (Lora), Bryce, Erika (Reid), Mason, Teagan, Jack, Sarah, Samantha and Alexandra and two great grandchildren CJ and Lethan, Brother-in-law Tom, and Sisters-in-laws Betty and Elaine and many nieces and nephews. Preceded in death by his parents, (Hillery O and Rose); Father, and Mother-in-law (Alvin and Lorrene), Brothers; Wayne, Donavan, Thomas, HO Junior, Roland, and sister Vivian (Clinton-Ross). Also Brothers-in-Law Don Ross, Edgar Bailey, and Marlin Kirchner.

The family of Arliss "Art" Roger Clinton created this Life Tributes page to make it easy to share your memories.

Funeral Service for Arliss Clinton age 79 of Clearwater, NE will...

Send flowers to the Clinton family.