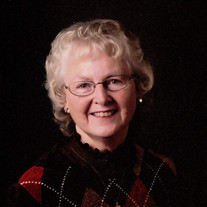 Funeral Services for Barbara A. Pellatz, age 78 of Neligh, Ne will be 10:30 a.m. Wednesday, January 2, 2019 at the Brunswick Community Church (C&MA), in Brunswick, Nebraska. Burial will be at Willowdale Cemetery with Pastor Peter Sample of Neligh’s Calvary Bible Church will officiate the funeral and graveside services. Visitation will be Tuesday, January 1, 2019 from 5:00 to 7:00 p.m. at Beyer Snider Memorial Funeral Home in Neligh, NE. Barbara was at home when she went to be with her Lord and Savior, Jesus Christ, on December 25, 2018, after a year-long battle with cancer. Beyer Snider Memorial Funeral Home in Neligh is handing the arrangements. Condolences maybe directed to family at www.beyersnidermemorialfh.com Memorial may be directed to Calvary Bible Church in Neligh and to Gideons International. Barbara Alyce (Wehenkel) Pellatz was born on May 3, 1940, in Orchard, Nebraska, to Milford and Verna (Kuhn) Wehnekel. Shortly thereafter, her family moved to Bellevue and then to Neligh, Nebraska, where Barbara spent her childhood years. She graduated from Neligh High School in 1958 as Salutatorian of her class. On June 7, 1959, she married her high school sweetheart, Larry Eugene Pellatz, at the Congregational Church in Neligh. They made their home on a farm northeast of Neligh where they spent their entire life together. They were blessed with six children: LuAnn Lin, Sandy Sue, Penny Alyce, Daniel Eugene, Wendy Ann, and Amy Alesa. After her children were grown and on their own, she worked at Casey’s General Store in Neligh for fifteen years. As a young mother, Barbara asked Jesus to forgive her of her sins and to come into her heart. Jesus changed her life; she was secure in Him and she never looked back. Barbara’s greatest desire in life was to raise a family who loved the Lord and knew Him as their personal Savior. Her priorities were God, husband, children, grandchildren, and great-grandchildren. Barbara is survived by Larry, her husband of 59 years, her six children and their spouses, LuAnn (Tony) Doerr of Brunswick, Nebraska, Sandy Mosel of Orchard, Nebraska, Penny (Steve) Westover of Harrison, Nebraska, Dan (Denise) of Ashland, Nebraska, Wendy (Chad) Meisgeier of Omaha, Nebraska, and Amy (Jerad) Knott of Doniphan, Nebraska, 19 grandchildren, 10 great-grandchildren with an eleventh due in January, and sisters Joyce (Russ) Striker of Milaca, Minnesota, and Phyllis (Robert) Montgomery of Donna, Texas. Barbara was preceded in death by her parents Milford and Verna Wehenkel, parents-in-law Rudie and Alta Pellatz, and a son-in-law, Rick A. Mosel.

Funeral Services for Barbara A. Pellatz, age 78 of Neligh, Ne will be 10:30 a.m. Wednesday, January 2, 2019 at the Brunswick Community Church (C&MA), in Brunswick, Nebraska. Burial will be at Willowdale Cemetery with Pastor Peter Sample of... View Obituary & Service Information

The family of Barbara Alyce Pellatz created this Life Tributes page to make it easy to share your memories.

Funeral Services for Barbara A. Pellatz, age 78 of Neligh, Ne...