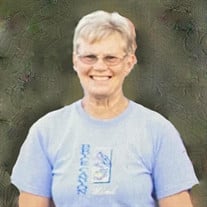 Memorial Service for Cheryl L. Holliday age 79 of Orchard, Nebraska will be 1:30 p.m. Tuesday, October 19. 2021 at Grove Lake Royal, Nebraska.  If attending service bring your lawn chair. Snider Memorial Funeral Home in Clearwater is handling the arrangements.  Cheryl passed away Friday, October 15, 2021 at her home.  Condolences may be sent to the family at www.snidermemorialfh.com    Cheryl Luree Holliday was born on September 2, 1942 to Clifford and Wilma (Gamble) Johnson at Wayne, Nebraska.  She attended school at Wayne and graduated with the Class of 1960 from Wayne High School.  She married Duane Lutt in November 1959. They were married for 20 years `and had four children - Rick, Mike, Rod, and Jill.   In addition to farm duties, Cheryl established the Country Nursery in the late ‘70s where she raised nursery stock and did landscaping. This business was eventually re-established by her son, Mike, who successfully owned and operated it for over 30 years before recently handing over the reins. Cheryl also provided landscaping services for other businesses, as well as teaching landscaping and plant care classes.  Following her departure from Wayne, NE, Cheryl moved to Dayton, WY where she drove for a pilot car service between Texas and Canada. Wanting to be closer to family, she purchased an out-of-operation fish hatchery north of Orchard, NE in 1984. After months of back breaking work, she got the hatchery back into operation, hatching and raising trout and stock fish, as well as adding a processing facility. After years of hard work on the hatchery, she sold it and moved back to Wyoming as the caretaker of the IXL Ranch. Once again, family drew her back to Orchard in 1992, and she embarked on what would be the pinnacle of her creative accomplishments - renovating a farm barn into a beautiful home that was featured in the Norfolk Daily News, Omaha World Herald, Nebraska Life Magazine, and HGTV. Cheryl’s zest for adventure and travel led to drive a charter bus for Arrow Stagelines, then worked as an international tour guide for Globus and Cosmos tours. When the tour industry was impacted by the events of 9/11, Cheryl looked back to her creative roots, and started Woodworks from the Barn, where she built hand-crafted wood creations and custom cabinetry for the remainder of her life. Cheryl’s talents were apparent in everything she touched. She was a master at gardening and landscaping, with her summer flowers painting beautiful pictures throughout her yard every year; and always sharing the bounty from her vegetable garden. She was skilled as a florist but chose to take those skills primarily outside. She was also a meticulous seamstress and sewed many wedding and bridesmaid dresses. She also drove semi-truck, did custom combining, raised chickens… the list goes on! She was the kind who worked from sun up to sun down every day - always having one more project to finish. Her God-given gifts will be greatly missed, but having shared many of those gifts with her children, they will live on. Cheryl was a member of Orchard Methodist Church. She is survived by her children:  Rick Lutt of Carthage, MO; Mike and Rhonda Lutt of Wayne, NE; Rod and Christin Lutt of Wayne, NE; and Jill and Pat Langan, of O’Neill, NE.  Grandchildren: Jason Lutt, Ashley Cooper, Dustin Lutt, Amber Lutt, Halsey Ruhl, Gabrielle Lutt, Noah Lutt, Morgan Langan, Blair Langan.  Nine great grandchildren.  Brother, Larry and Lorraine Johnson of Wayne, NE.   She was preceded in death by her parents; sisters, Barbara Jo Pedersen, Hollis Frese, and infant brother, Gene Johnson.

The family of Cheryl Luree Holliday created this Life Tributes page to make it easy to share your memories.

Send flowers to the Holliday family.