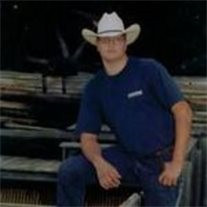 Christopher Thramer Ewing � Funeral Services for Christopher Thramer age 22 of Ewing will be 10:00 am, Thursday, March 13, 2008 at St. Peter�s Catholic Church in Ewing with Father Bill Safranek, officiating. Burial will be in St. Peter�s Catholic Cemetery. Visitation will be Wednesday, March 12, 2008 from 4 - 8:00 pm with a 7:30 prayer service all to be held at St. Peter�s Catholic Church in Ewing. Snider Memorial Funeral Home of Clearwater is handling the arrangements. Chris passed away March 9, 2008 at Avera St. Anthony's Hospital in O'Neill. Christopher Thramer was born on September 7, 1985 in O�Neill, Nebraska to Michael and Cheryl (Koenig) Thramer. He attend School in Ewing and Graduated in 2004. Christopher went on to college at Northeast in Norfolk and received a Welding Degree in 2005. He then returned to Ewing to work at Thramer Irrigation. The fall of 2007 worked for Ahlstedt farms and worked at Two Rivers Irrigation. In the summers he liked working for Grandpa and Uncle Jim in the hay fields. He was a member of St. Peter�s Catholic Church in Ewing. Christopher enjoyed hunting, being outdoors, his pickup, and hanging out with his friends. He lived his life to the fullest. He is survived by his parents, Sisters, Michelle & Tiffany; Brothers, Thomas & Adam. His Grandparents James Koenig and Mark & Joan Thramer. Aunts & Uncles Jim Koenig, John & Brenda Koenig, Connie & Bruce Frederick, Sue & Michael Harrison, Pam & Dave Frerichs, Mary & Gary Thiele, Theresa & Todd Timmerman, Patti Koenig and Sandy Koenig. A host of cousins, family, and friends. He is preceded in death by Grandmother Jolyene Koenig.

The family of Christopher Michael Thramer created this Life Tributes page to make it easy to share your memories.

Send flowers to the Thramer family.