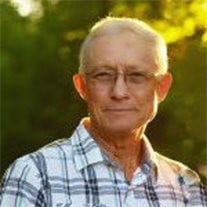 Funeral Services for Clayton D. Hoke age 70, of Ewing, will be 10:30 a.m., Thursday, May 21, 2015 at United Methodist Presbyterian Church in Ewing, Ne with Rev. Stuart Davis, Officiating. Visitation will be 5:00-7:00 Wednesday, May 20, 2015 at Snider Memorial Funeral Home in Clearwater, Ne. Burial will be in Ewing City Cemetery at Ewing, Ne. Clayton passed away Sunday, May 17, 2015 at Avery St. Anthony's Hospital in O'Neill. Snider Memorial Funeral Home is handling the arrangements. Clayton DeWitt Hoke was born on March 15, 1945 to Florence (Herting) and DeWitt Hoke in Ewing, NE. He attended school in Ewing and graduated with the Class of 1963 from Ewing High School. After graduating he attended The University of Nebraska at Lincoln receiving a bachelor's degree. After college he came back to farm on the family farm. He was the 3rd generation and his son Aaron is the 4th generation. On June 30, 1973 he united in marriage to Sue Burk at St. Peter's Catholic Church in Ewing. Clayton was a member of Ewing School Board, Farm Bureau, and United Methodist Presbyterian Church in Ewing. He enjoyed working on the farm and spending time with his family. Survived by his wife, Sue Hoke of Ewing, NE. Son, Aaron and wife Candice Hoke of Orchard, NE. Daughter, Amanda and husband, Jamie Schluns of O'Neill, NE. 5 grandchildren, Blake, Mason, Preston Hoke and Meg and Haley Schluns. Sister, Janell and husband Bob Hobbs of Ewing, NE. Mother-in-law, Helen Burk of O'Neill, NE. Preceded in death by parents, DeWitt and Florence Hoke.

The family of Clayton Dewitt Hoke created this Life Tributes page to make it easy to share your memories.

Funeral Services for Clayton D. Hoke age 70, of Ewing, will be...

Send flowers to the Hoke family.