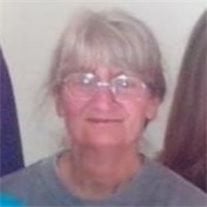 Memorial Service for Cynthia Sanderson age 66, of Oakdale, Ne will be 10:30 am; Tuesday, October 20, 2015 at St. John's Catholic Church rural Clearwater. Burial will be in Oakdale Cemetery in Oakdale, Ne. There is no visitation. Cynthia Kay... View Obituary & Service Information

The family of Cynthia Kay Ann Sanderson created this Life Tributes page to make it easy to share your memories.