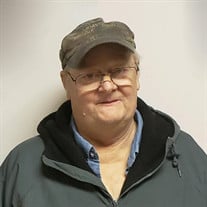 Memorial Services for Dennis W. Anson age 69, of Ewing, Ne will be 10.30 a.m. Thursday, May 23, 2019 at Snider Memorial Funeral Home in Clearwater with Pastor Wayne Smith, Officiating.  Burial will be in Ewing City Cemetery.  Visitation will be 4:00 - 7:00 p.m. Wednesday, May 22, 2019 at Snider Memorial Funeral Home in Clearwater, NE. Denny passed away Saturday, May 18, 2019 at Avera St. Anthony’s Hospital in O’Neill, NE.   Condolences may be directed to the family at www.snidermemorialfh.com Dennis Wayne Anson was born on August 18, 1949 in Tilden, NE to Vance and Thelma (Kruntorad) Anson.  Dennis graduated from Ewing High School in 1967 and went on to earn an Associates Degree in drafting from Nettles College in Columbus, NE.  After college, he worked in drafting before eventually talking a job with Hobbs Farms in Ewing, NE.  In February 1977, he married Frances (Slizoski) Anson and to this union two children were born. The couple purchased Southfork Bar in 1982 and ran it until their divorce in 1984.  Dennis continued to operate the bar with the help of his mother, Thelma, until 2007.  He enjoyed working next to his mother, talking to the customers, and trying different foods.  After selling the bar, he worked at SteppCo helping the owner, Tom Stepp, with heating and air conditioning. He eventually had to retire due to his long, hard battle with cancer. Dennis joined the Ewing Volunteer Fire Department in 1982 and proudly served as fire chief for 15 years beginning in 1990.  Fishing was one of Dennis’ favorite past times, and he went any chance he got, often with his brother Terry.  He was a very proud grandfather of six grandchildren, and he spent his spare time attending as many of their events as he could. He is survived by his mother, Thelma, two children, Kimberly Strong (Dustin) of O’Neill, and John Anson of Ewing, a brother, Terry Anson (Rita) of Ewing, and six grandchildren.  He was preceded in death by his father Vance.

Memorial Services for Dennis W. Anson age 69, of Ewing, Ne will be 10.30 a.m. Thursday, May 23, 2019 at Snider Memorial Funeral Home in Clearwater with Pastor Wayne Smith, Officiating.  Burial will be in Ewing City Cemetery.  Visitation will... View Obituary & Service Information

The family of Dennis Wayne Anson created this Life Tributes page to make it easy to share your memories.