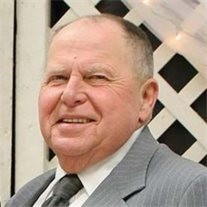 Funeral Services for Dennis D. Ternus age 69 of Neligh, NE will be 10:30 am, Monday, July 27, 2015 at St. Francis Catholic Church in Neigh with Father Christopher Onuoha and Father Ross Burkhalter, Officiating. Burial will be in Humphrey. Visitation will be Sunday, July 26, 2015 from 4:00 to 7:30 St. Francis Catholic Church with a Wake Service at 7:30 pm at church. Beyer Snider Memorial Funeral Home in handling the arrangements. Dennis passed away July 22, 2015 in Neligh. Dennis DeWayne Ternus was born on March 15, 1946 to Georgia (Summers) and Raymond "Scoop" Ternus at Norfolk, NE. He graduated from Creston High School in 1965. He went to work at Behlen Manufacturing for 5 years. During this time he was united in marriage to Doris Busch on August 3, 1966 at Leigh, NE. They then moved to Humphrey and he worked at Humphrey Police Department and Platte County Sheriff's Department for six years. Dennis and Doris owned and operated the D & D Bar in Humphrey. In 1978, they moved to Neligh where he started working for the Nebraska State Patrol until retiring in January 2006. He also, worked at the Antelope County Sheriff Office for 4 years. He enjoyed hunting, his dogs, his flowers, but especially his family and friends. He also, like telling jokes. He was a member of the KC's for over 30 years and St. Francis Catholic Church. Survived by his wife, Doris Ternus of Neligh, NE. Children and grandchildren: Darin and wife, Becky Ternus and Jacob of Clearwater, NE; Mary Jane and husband, Terry Bauer and children, Trent, Heather, Austin, Natalie of Elgin, NE; Michelle Ternus and friend, Jason Johnson of West Point, NE. Brothers: George C. and Vicki Ternus and Donald R. Ternus, all of Creston, NE. In-laws: Jeanette and Bob Jindra of Ft. Madison, IA, Corky and Lea Busch of Dodge, NE, and Dean and Debbie Busch of Muskogee, OK. Numerous nieces and nephews and friends. Preceded in death by parents, 3 children: DeAnne Marie, Denise Michelle, Dana Michael. Sister-in-law, Linda Ternus

Funeral Services for Dennis D. Ternus age 69 of Neligh, NE will be 10:30 am, Monday, July 27, 2015 at St. Francis Catholic Church in Neigh with Father Christopher Onuoha and Father Ross Burkhalter, Officiating. Burial will be in Humphrey.... View Obituary & Service Information

The family of Dennis DeWayne Ternus created this Life Tributes page to make it easy to share your memories.

Send flowers to the Ternus family.