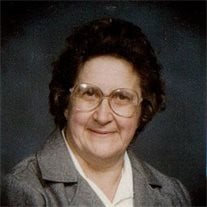 Funeral Services for Diane L, Bolling age 81 of Neligh, NE will be at 10:30 a.m. Wednesday, January 10, 2018 at Grace Lutheran Church in Neligh, NE with Pastor David Kuhfal, Officiating. Visitation will be 5:00 - 7:00 p.m. Tuesday, January 9, 2018 at Beyer Snider Memorial Funeral Home. Burial will be in Clearwater Cemetery. Beyer Snider Memorial Funeral Home of Neligh is handling the arrangements. Diane passed away Wednesday, January 3, 2018 at her home. Condolences may be directed to the family at www.beyresnidermemorialfh.com Diane Lucille Bolling was born September 20, 1936 in Royal, Ne to Oscar and Sylvia Mae (Leslie) Ziegenbein. She was the youngest of 10 children. Diane grew up on a farm South of Royal, attended country school, and graduated from Neligh High School with the Class of 1954. On June 2, 1956 she was united in marriage to Louis Richard Bolling at Neligh, Nebraska. They had on child, Douglas Lee, and resided in Neligh together for 51 years. Diane was very active in her community, serving as den mother for a local cub scout group, participated in the women's bowling league, served many positions at Grace Lutheran Church in Neligh, and was instrumental in the organization and construction of the new Neligh Senior Center. She also served 3 years on the Antelope County Area Board of Aging. Diane spent her pastime attending to family, quilting, and doing needlework. She had an avid love for cooking and travel. Through the years, she was employed by the Neligh Cleaners, Neligh Public Schools, and Antelope Memorial Hospital. Survived by son, Doug and Wendy Bolling of Neligh, Ne. 3 grandchildren, Krista Bolling, Mary Bolling, and Sara (Ian) Barnes. 2 great grandchildren, Andrew and Issac Barnes. Sister, Myrtle Blair of Winnetoon, Ne. Brothers, Herb Ziegenbein of Winnetoon, Ne and Harold Ziegenbein of Neligh, Ne. Preceded in death by her parents and husband. Brothers, Hugh, Glenn, Howard, and Ken. Sisters, Ruth Carlson and Gyva Rodgers.

The family of Diane Lucille Bolling created this Life Tributes page to make it easy to share your memories.

Send flowers to the Bolling family.