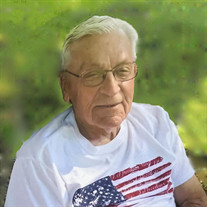 Funeral Service for Donald R. Thompson age 84 of Neligh, NE will be 10:30 a.m. Saturday, May 7, 2022, at United Methodist Church in Neligh with Pastor Bruce Phillips, officiating. Visitation will be 5:00 – 7:00 p.m. Friday May 6, 2022, at United Methodist Church in Neligh. Burial will be at a later date in Laurel, NE. Beyer Snider Memorial Funeral Home is handling arrangements. Don passed away May 3, 2022, at Columbus Community Hospital. Condolences may be directed to the family at www.beyersnidermemorilafh.com In lieu of flowers, memorials are suggested to the family for later designation. Donald Ray Thompson was born on April 7, 1938, in Wynot, NE to Harold and Ardis “Cleon” (Bottolfson) Thompson. At the young age the family moved to a farm north of Laurel, NE. He attended a rural school where he graduated from 8th grade and was awarded the American Legion Award for top high score on 8th grade exam in Cedar County. He then attended Laurel Public High School and graduated in the Class of 1955, and was awarded football honors, and a Regents scholarship. Don married the love of his life, Peggy Hattig, on June 1, 1958. He graduated 1959, from Wayne State College with a degree in Education. To this marriage they were blessed with four sons: Rock, Rob, Rick, and Ron. He then went to Coleridge, NE to teach Industrial Arts, Science, and coaching. He earned his Master’s Degree in Administration from Kearney State College and moved to Osmond to take a Superintendent position. Later the family moved to Crofton where he was a Superintendent and while there, he earned his specialist in Education degree from the University of South Dakota. His career then took him to Neligh as the Educational Service Unit #8 Administrator in 1975. He retired from that position in 1999. In their retirement years they lived their summer months in Neligh and winter months in Mesa, AZ. Don liked to do construction and did masonry work on many fireplaces. He enjoyed hunting, fishing, spending time at his farm, telling jokes, watching Husker sports, officiating football games and especially spending time with his family. Don is survived by his wife, Peggy of Neligh, NE. Children: Rock (Linda) Thompson of Neligh, NE; Rob (Tammy) Thompson of Pickstown, SD; Rick (Cathy) Thompson of Battle Creek, NE; and Ron (Christie) Thompson of Firth, NE, 15 grandchildren, and 26 great-grandchildren. Brothers, Zeb Thompson and Jim (Karen) Thompson. Sister, Pam (Dennis) Ekberg, and sister-in-law Phyllis Thompson. Preceded in death by his parents, brother, Willis.

The family of Donald Ray Thompson created this Life Tributes page to make it easy to share your memories.

Send flowers to the Thompson family.