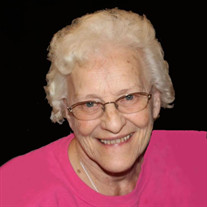 Funeral Services for Donna Knapp age 87 of Clearwater, NE will be at 10:30 a.m. Monday, February 7, 2022 at United Methodist Church in Neligh, NE with Pastor Bruce Phillips, Officiating.  Visitation will be 5:00 p.m. to 7:00 p.m. Sunday February 6, 2022 at Snider Memorial Funeral Home in Clearwater, NE.  Burial will be in Clearwater Cemetery.  Snider Memorial Funeral Home is handling the arrangements.  Donna passed away Friday, February 4, 2022 at Arbor Care Center in Neligh.  Condolences may be directed to the family at www.snidermemorialfh.com          Donna Fae Knapp was born on September 13, 1934 at Orchard, Nebraska to Frederick and Velva (Butterfield) Ickler.  Growing up as one of thirteen children, Donna was taught the value of hard work, a smile, and enjoying your family.   These characteristics were some that she modeled daily.   Donna was working at Wanek Drug when she met James Knapp.  On June 20, 1954, they were united in marriage in Neligh at the United Methodist Church.  They eventually made their home outside of Clearwater where they farmed and raised their three children.   She continued to work at different places through the years such as JcPenney’s in Neligh, school cook, Caseys, and helped cater with the L-bar-B Steakhouse in Clearwater.  She enjoyed her flower gardens, ceramics, bowling, dancing, touring local wineries, and taking trips to Branson.  She especially enjoyed trips with her sisters, as well as family gatherings and holidays.  Donna was a member of the United Methodist Church, Red Hat Society, and Samba Card Club.       She is survived by her children:  Joel and Deb Knapp of Shelby, NE; Alan and Sandy Knapp of Niobrara, NE; and Lori Knapp of Clearwater, NE and her special friend Chuck Thramer.  14 grandchildren and 45 great grandchildren.       Preceded in death by her parents and husband.  Brothers: Gerald, Russell, and Dale.  Sisters:  Dixie, Alice, Raedean, Marcelene, Violet, Ione, Dorothy, Betty, Delores.

The family of Donna Fae Knapp created this Life Tributes page to make it easy to share your memories.

Funeral Services for Donna Knapp age 87 of Clearwater, NE will...

Send flowers to the Knapp family.