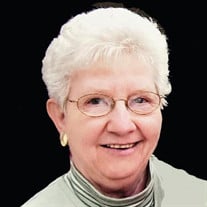 Memorial Services for Donna Peterson, age 80 of Neligh will be 10:30 a.m. Wednesday, September 30, 2020 at Antelope County Fair Building in Neligh, NE.  Burial will be in Laurel Hill Cemetery in Neligh.  Beyer Snider Memorial Funeral Home in Neligh is handling the arrangements.  Donna passed away September 21, 2020 at Antelope Memorial Hospital in Nelighwith her family by her side.  Condolences may be directed to the family at www.beyersnidermemorialfh.com Family has requested social distancing and mask to be worn due to current health concerns. In lieu of flowers, memorials can be sent to the family in her name. Donna Maurine (Damme) Peterson was born July 19, 1940 in Clearwater, NE to John Lessly and Nina Viola (Lee) Damme.  She grew up in Clearwater and graduated from Clearwater High School with the class of 1958. She earned her teaching degree at Wayne State College in Wayne, Nebraska. For 11 years she taught school in several rural schools and one year in Clearwater. She was loved by her former students who always made a point to talk to her when she saw them.  On July 1, 1961, she married Terry Peterson at the First Congregational United Church of Christ in Neligh, NE. Years later, her two daughters would also marry in that same church. Terry and Donna lived in Clearwater for 4 years  before moving to their farm Northeast of Neligh where they raised their four children; Lisa, Sonya, Scott, & Travis. After teaching, and then staying home with her children and helping with their custom farming operation, Donna took a job at Neligh Insurance and Reality where she worked for many years. Donna was a member of the First Congregational United Church of Christ at Neligh where she served several terms on the Deaconate Board and was member of the women's fellowship. She was a long time member of the women's bowling association and the Neligh Oakdale High School Booster Club.  Donna loved country music concerts and attending all the activities her kids where a part of, as well as traveling many miles to watch her grandchildren play sports and other actives. Donna was so kind, and was always concerned for others. She was a faithful card mailer for any occasion and was the first one at your house if you had fallen on hard times. We all loved her giving heart.  Donna had many friends in the Neligh, Clearwater, and Elgin areas. She enjoyed her morning coffee with "the girls" at the Neligh cafe for breakfast. In 2012 while on vacation in Texas, Donna suffered a traumatic brain bleed. The Doctors gave her a 1% chance of surviving the operation. Terry assured his kids that he would be bringing her home, and after 71 days in the hospital in Texas and 3 weeks at Madonna rehab hospital in Lincoln he did just that. The next 9 years were a gift and we never took them for granted. Roles were reversed but Terry took amazing care of Donna, and his children are forever grateful for following the vows he took 59 years before. He loved and cherished our mom through sickness and health until her last day.   Donna’s greatest love was spending time with her family, and in July 2020 they all celebrated her 80th birthday in the Black Hills of South Dakota. The family spent 3 wonderful days telling stories, laughing, and enjoying great meals. Donna had fun watching all the grandkids and great grandkids and had some very in-depth conversations and giggle sessions with baby Willa.  Donna is preceded in death by her grandparents, parents Les & Nina, sister Shirley Stelling and granddaughter Paige Leslie Schultz; parents-in-law Harold & Margaret (Detlefsen) Peterson; sister-in-laws Marie Damme, Ellen Heermann, Sharron Mickelson, Jeanette Hansen and Jeanette Peterson; brother-in-laws Jack Kallhoff, Ron Peterson, Darryl Peterson, Lee Peterson, Lynn Peterson, Barry Peterson and Dean Peterson, and many relatives that she loved so much. Donna is survived by her husband of 59 years, Terry Peterson; daughters, Lisa (Tom) Chohon of Ainsworth and Sonya (Ted) Schultz of Wood River; sons, Scott of Brookings, SD and Travis (Kara) of Elko, MN; Eleven grandchildren: Clay Chohon of Lincoln, Hayes Chohon of Mitchell, SD; Shelby (Judd) Allan of Alda, Carson Schultz of Wood River, and Kyle Schultz of Kearney;  Tyson, Reid (Morgan), Gunner and Keller Peterson of Brookings, SD; and Caid & Brynn Peterson of Elko MN; great-grandchildren: Kaysen, Tate & Willa Allan of Alda, NE, Addison Svennes of Sioux Falls, SD and baby Peterson due early 2021. She is also survived by her brother, John Damme of Clearwater; her sister, Bonnie Kallhoff of O’Neill; brother-in-laws, Arnold Stelling of Yankton, SD, Allen (Gisela) Peterson of Hayden Lake, Idaho and Loren Hansen of Plainview; sister-in-laws, Louise Peterson of Oceanside, CA, RaeJeane Peterson of Neligh and Ida Peterson of Omaha, and many cousins, nieces, nephews and dear friends.

The family of Donna Maurine Peterson created this Life Tributes page to make it easy to share your memories.

Memorial Services for Donna Peterson, age 80 of Neligh will be...

Send flowers to the Peterson family.