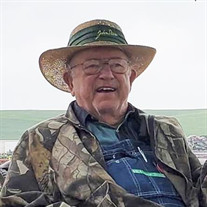 Funeral services for Duaine A. Filsinger age 82, of Clearwater, NE will be at 10:30 a.m. Monday, December 23, 2019 at Concordia Lutheran Church in Clearwater with Pastor Daniel Feusse officiating. Burial will be in Clearwater Cemetery. Visitation will be from 5:00 - 7:00 p.m., Sunday, December 22, 2019, at Snider Memorial Funeral Home in Clearwater. Duaine passed away Wednesday, December 18, 2019, at his home in Clearwater. Snider Memorial is handling the arrangements. In lieu of flowers memorials are suggested to the family for future designations. Duaine Arthur Filsinger was born on August 29, 1937 to Arthur and Gladys (Hankla) Filsinger at home in Elgin, Nebraska. He attended country school where he would ride his horse, Pal to school Pal would go back home and come back when school was over to bring Duaine home. He attended Bartlett High School and graduated with the Class of 1954. Baptized and confirmed at Trinity Lutheran Church at Elgin. After graduation he returned to teach school for 3 years at a country school east of Elgin. On May 19, 1957; he was united in marriage to the love of his life; Virginia Cornett. They made their home in Clearwater where he worked for Contois Motor Co. for five years and then went to work for Nolze Implement for 30 years before leaving and beginning Filsinger Repair where he became nationally known for his two cylinder repair and classic John Deere restoration. He collected unique and rare John Deere memorabilia, tractors, and two cycle engines. He opened the “The Deere Shed” a John Deere museum which has brought people from around the world to hear his stories and share his passion. He enjoyed his John Deere tractors, gas engines and making crosses. He was a member of Concordia Lutheran Church and Clearwater Fire Department/EMT. He belonged to RaeValley Heritage and Norfolk Two cylinder Club. He was also a past Clearwater School board member. He was nicknamed by his great grandson “Grandpa Tractor” Survived by his wife, Virginia of Clearwater, NE. Children: Kim (Jose) Ramirez of Windsor, CA; Kevin (Celine) Filsinger of Clearwater, NE; Karena (Steve) Sharples of Tilden, NE; and Kaleen (Paul) Juergens of Sheridan, WY. 14 grandchildren and 17 great grandchildren. Sister-in-law Betty (Dallas) Stettner of Sidney, NE and brother-in-law, Gary (Aradelle) Cornett of Longview, TX. Preceded in death by his parents.

Funeral services for Duaine A. Filsinger age 82, of Clearwater, NE will be at 10:30 a.m. Monday, December 23, 2019 at Concordia Lutheran Church in Clearwater with Pastor Daniel Feusse officiating. Burial will be in Clearwater Cemetery. Visitation... View Obituary & Service Information

The family of Duaine Arthur Filsinger created this Life Tributes page to make it easy to share your memories.

Funeral services for Duaine A. Filsinger age 82, of Clearwater,...

Send flowers to the Filsinger family.