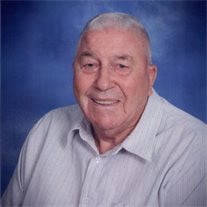 Funeral Services for Dwight W. Binger age 90 of Neligh, NE were 10:30 a.m., Friday, June 27, 2014 at Grace Lutheran Church with Pastor David Kuhfal, Officiating. Music was provided by Sue Meyer, Pianist and Duane Christiansen, Soloist. Burial was in Laurel Hill Cemetery in Neligh. Pallbearers were Kent Von Kampen, Harlan Anson, Dustin Binger, Tyler Binger, Zach Henery, Levi Kerkman, Troy Henery, and Shane Dudek. Visitation was from 5 to 7 pm, Thursday, June 26, 2014 at Beyer Snider Memorial Funeral Home in Neligh. Dwight passed away on Tuesday, June 24, 2014 at his home. Beyer Snider Memorial Funeral Home is handling the arrangements. Dwight Walter Binger was born on March 8, 1924 to Walter J. Binger and Evelyn (Wagner) Binger at Antelope Creek, NE. He attended school in Neligh and graduated with the class of 1941 from Neligh High School. Dwight attended State Patrol Academy in Ashland, NE and several other special training schools. On May 17, 1946 he was united in marriage to Ruth Huelle at Immanuel Lutheran Church in Tilden. He was a State Patrol Investigator/Law Enforcement for many years. He started his life long career in 1956 in Central City, NE, then 1969 moved to Grand Island, NE, and then 1979 he moved to Plainview, NE to farm and did butchering. He then moved to Neligh where he was the Chief of Police in Neligh from 1988 to 1999. Ruth passed away in 2008. He liked dancing polkas, fishing, woodworking, butchering, and most of all being a cop. He was a very active at Neligh Senior Center, a member of Grace Lutheran Church, he was a past elder, and member of LLL. He is survived by daughters: Evelyn Von Kampen of Norfolk, NE, Julie and husband, Marlin Drobny of Lynch, NE. Sons: Richard and wife, Jeri Binger of New Cambria, KS and John Binger of Seward, NE. 16 grandchildren, 34 great grandchildren, and 1 great great grandchildren. Brother, Darrel Binger of Plainview, NE and brother-in-law, Dean and his wife, Merlene Paulsen of Central City, NE. Preceded in death by his parents and wife. Sister, Darlene Jones. Daughter, Mary Binger.

The family of Dwight Walter Binger created this Life Tributes page to make it easy to share your memories.

Send flowers to the Binger family.