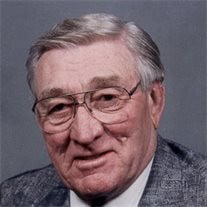 Funeral service for Earl W. Schindler age 92 of Neligh, NE will be 10:00 a.m. Saturday, July 9, 2016 at St. John's Baptist Catholic Church rural Clearwater with Father James Kramper, Officiating. Burial will be in St. Anthony's Catholic Cemetery. Visitation will be 4:30 to 7:30 Friday, July 8, 2016 with a 7:30 p.m. Prayer service at Snider Memorial Funeral Home in Clearwater, NE. Earl entered eternal rest on July 4, 2016 at Antelope Memorial Hospital in Neligh. Snider Memorial Funeral Home is handling arrangements and condolences may be directed to the family at www.snidermemorialfh.com In lieu of flowers, please consider memorials to Ewing Rural Fire Dept., the Neligh Fire Dept. and Antelope Memorial Hospital. Earl William Schindler was born on August 30, 1923 to William Albert and Anna (Burk) Schindler. He grew up on the Burk Homestead South of Knievel's Store on the Burke home place. He attended school at Deloit Dist. 18 ½ and graduated from Ewing High School Class of 1940. On April 3, 1945, he was united in marriage to Bernice Mary Tagel at St. John the Baptist Catholic Church, rural Clearwater. To this union of 61 years, six children were born. He served on the Rural Ewing Fire Board for 10 years, and was a member of the Deloit Township Board and rural St. John's Catholic Church Parish Council. He farmed most of his life South of Ewing until he moved to Neligh in 1991. Earl enjoyed fishing and sharing stories with family and neighbors. He often shared wine and cheese, M&M's, cashews, and popcorn balls with visitors. Earl was an avid woodworker. He is survived by his daughters, Diann Laursen of Stephenville, TX, Gloria and Brian Christiansen of Neligh, NE, Brenda and Ron Riley of Grand Island, NE, Rebecca and Ken Chohon of Yukon, OK, and sons, Greg and Vicki Schindler of Show Low, AZ, and John Schindler of O'Neill, NE; 16 grandchildren and 29 great grandchildren, and his brother Ralph and Betty of Omaha. He is preceded in death by his wife Bernice, his parents Bill and Anna Schindler, his brother James, his son-in-law Richard (Dick) Laursen, and brother-in-law Ludwig Tagel (Loretta).

The family of Earl Willam Schindler created this Life Tributes page to make it easy to share your memories.

Send flowers to the Schindler family.