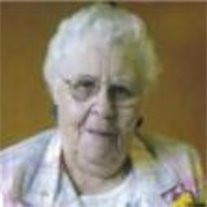 Funeral services for Edith Hixson age 95 of Clearwater, Ne will be Thursday, July 27, 2006 at 2:00 pm at the United Methodist Church in Clearwater with Rev. Martha Voigt officiating. Burial will be in the Clearwater cemetery. Pallbearers will be Jim Hixson, Jeff Hixson, Nick Hamik, Mike Hamik, Rocky Jones and Jack Jones. Music was provided by Bob Sisson soloist and Carol Thiele organist. Visitation will be from 4 to 8 pm on Wednesday, July 26, 2006 at Snider Memorial Funeral Home in Clearwater. She passed away Saturday, July 22, 2006 at the Neligh Nursing Home in Neligh. Edith Hixson was born August 22, 1910 at Venus, Ne the daughter of Calvin and Laura (Gentzler) Yorke. She graduated from Clearwater High School in 1928 and attended several state colleges obtaining her teachers certificate and taught for four years. Then in 1933 she married Randall Hixson at Neligh, Nebraska. The couple made their home in Clearwater where they ran the Standard Oil business. In 1956 she retained her teachers certificate to teach in the classroom once again and taught for a total of 27 years in the classroom and then still continued to substitute teach as needed. Edith and Randall were very avid followers and booster supporters of Clearwater sports, activities, the town and their church. They were voted many times fans of the year and to show there appreciation donated a sign to the new school, the victory bell stand and to the scoreboard at the football field. She loved and enjoyed everyone and was a friend to all. She was a member of the United Methodist Church for 85 years. Survivors include a son Jack and Gay Hixson of Neligh, a daughter Janel and Dana Sisson of O�Neill; two sisters Rena Cave and Frances Forsland; Grandchildren: Krystal and Mike Hamik of O�Neill, Bob Sisson of Omaha, Jim and Kim Hixson of Randolph, and Jeff and Dawn Hixson of Neligh; Great-Grandchildren: Nick and Malarie Hamik, Stephanie, Samantha, and Toni Hamik, Brooke, Malerie, Judson, and Jaclynn Hixson, Great-GreatGranddaughter Brilynn Hamik. She was preceded in death by her parents, her husband, brothers Alan Yorke, and Roy Yorke; and three sisters: Verna Anderson, Amy Sipe and Mabel Jacobson.

Funeral services for Edith Hixson age 95 of Clearwater, Ne will be Thursday, July 27, 2006 at 2:00 pm at the United Methodist Church in Clearwater with Rev. Martha Voigt officiating. Burial will be in the Clearwater cemetery. Pallbearers will... View Obituary & Service Information

The family of Edith Irene Hixson created this Life Tributes page to make it easy to share your memories.

Funeral services for Edith Hixson age 95 of Clearwater, Ne will...

Send flowers to the Hixson family.