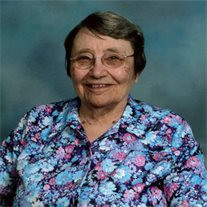 Funeral Services for Elizabeth "Betty" DeCamp age 106, of Neligh, were at 10:30 am, November 18, 2013 at St. Francis Catholic Church in Neligh, NE with Father John Broheimer, Officiating. Visitation was from 5 -7 pm Sunday, November 17, 2013 at the St. Francis Catholic Church with a 7 pm Rosary. Music was provided by Jane Ruterbories. Burial will be at Laurel Hill Cemetery in Neligh. Pallbearers were Ed Richart, Walt Richart, Larry Reuss, Tom DeCamp, Steve DeCamp, and Dan Chilcoat. Beyer Snider Memorial Funeral Home in Neligh. Betty passed away Wednesday, November 13, 2013 at Golden Living Center in Neligh, NE. Elizabeth "Betty" Ann DeCamp , daughter of John and Elizabeth (Kloster) Richart, was born on May 22, 1907 at Petersburg, NE. She attended school at Raeville. On October 24, 1942 she was united in marriage to Bill Reuss at Elgin. Bill served in WWII where he lost his life in action. She continued to live in Elgin and started a seamstress shop. On February 18, 1958 she was united in marriage to Marcus DeCamp at St. Joseph Catholic Church in Beatrice, NE. They lived in Neligh before moving to Fremont. From there they moved to South Dakota, North Dakota, and Wyoming. After he retired they returned to Neligh in 1983. Betty was member of the VFW Auxiliary Unit 5816 and "Betty's Club". St. Francis Catholic Church, Rosary Sodality, and church quilting club. Betty is survived by many nieces and nephews. Preceded in death by her parents, and both husbands. Sisters, Ella Weiler and Leona Scholl. Brothers, Frank Richart, John Richart, and Henry Richart.

The family of Elizabeth Ann DeCamp created this Life Tributes page to make it easy to share your memories.

Send flowers to the DeCamp family.