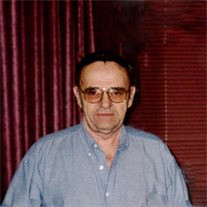 Memorial Services for Elvon Ziems age 72, of Wausa, NE, were 11:00 am, Tuesday, April 23, 2013 at Concordia Lutheran Church in Clearwater, with Pastor Daniel Feusse, Officiating. Music was provided by Caroline Jacke, Organist and John Petersen, Soloist. Burial was in the Ziems Cemetery, rural Clearwater. Honorary Pallbearers were Zach Knapp, Chris Knapp, Tait Ziems, Teagan Ziems, and Trindan Ziems. Visitation was a one hour before Memorial Service. Snider Memorial Funeral Home in Clearwater is handling the arrangements. Elvon passed away Wednesday, April 17, 2013. Elvon Henry Ziems was born on July 24, 1940 to Henry and Adelle (Sanne) Ziems on the farm South of Deloit, NE. He attended school in Clearwater, NE. On February 10, 1963 he was united in marriage to Beverly Meyer. To this marriage they had 2 children, Jody and Brian. He lived his life farming until 1966 and moved to Clearwater to do lawn care and worked at Department of Roads for a short time. He spent the rest of his time at the Wausa Nursing Home. Elvon enjoyed fishing, camping, playing cards and spending time with his family. Survivors include his wife, Bev of Plainview, NE. His children, Jody and husband, Todd Napier of Tilden, NE and Brian and his wife, Stacy Ziems of Plainview, NE. His grandchildren, Zach, Chris Knapp, Tyler, Tiffany, and Cody Napier, Tait, Teagan, Trindan Ziems. A sister, Carol Hall of Pierce, NE. He is preceded in death by his parents. His siblings, Jeanette Arbogast, Mona Reinke, and Debbie Larson.

The family of Elvon Henry Ziems created this Life Tributes page to make it easy to share your memories.

Memorial Services for Elvon Ziems age 72, of Wausa, NE, were...

Send flowers to the Ziems family.