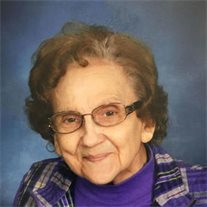 Funeral Services for Florence E. Knievel age 89 of Neligh will be 10:00 a.m. Wednesday, November 9, 2016 at St. Francis Catholic Church in Neligh, NE with Father Christopher Onuoha. Burial will be at St. Boniface Catholic Cemetery in Elgin. Visitation will be Tuesday, November 8, 2016 5:00 to 7:00 p.m. at St. Francis Catholic Church with a Rosary at 7:00 p.m. Beyer Snider Memorial Funeral Home is handling the arrangements. She passed away Saturday, November 5, 2016 at Neligh Rehabilitation and Care Center. Condolences may be directed to family at www.beyersnidermemorialfh.com Florence E. Knievel was born on December 15, 1926 at Elgin, Nebraska to Mathias and Anna (Wlaschin) Petsche. She grew up on a farm south of Elgin and attended Star Elementary School in rural Elgin. She graduated from Tilden High School. On April 4, 1945 she was united in marriage to William A. Knievel. They operated a dairy farm near Clearwater, Nebraska for 20 years before purchasing O.K. Tire Store in Neligh, Nebraska in 1965. Florence worked at Coast to Coast Store in Neligh for several years and then managed the office at O.K. Tire for many years. Florence and Bill were married for 44 years before his death in 1989. She enjoyed working at O.K. Tire and loved watching Wheel of Fortune and the Nebraska football games on T.V. She is survived by her children: Duane (Joyce Welding) Knievel of Neligh, Nebraska, Ruth (Bob) Welding of Morrison, Colorado, and Bill L. Knievel of Neligh, Nebraska, 12 grandchildren and 14 great grandchildren. She was preceded in death by her spouse, parents, and infant son, Kenneth. Siblings: Anna (Ralph) Harris, Richard (Beatrice) Petsche, Lawrence Petsche, Hildagarde (Peter) Wolken, Stanley (Rita) Petsche and Adella (John) Weir and infant Frances Petsche.

The family of Florence E. Knievel created this Life Tributes page to make it easy to share your memories.

Funeral Services for Florence E. Knievel age 89 of Neligh will...

Send flowers to the Knievel family.