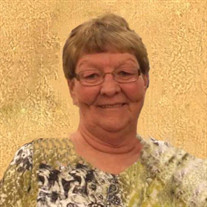 Funeral Service for Frances Anson age 68 of Ewing, Nebraska will be 10:30 a.m. Tuesday, December 21, 2021 at St. Peters Catholic Church in Ewing, NE with Father John Norman, officiating. Visitation will be 4:00 p.m. to 7:00 p.m. Monday, December 20, 2021 at Snider Memorial Funeral Home in Clearwater, NE. with a time of sharing stories of Frances at 6:30 p.m. Burial will be in St. Peter’s Catholic Cemetery in Ewing. Snider Memorial Funeral Home is handling arrangements. Frances passed away on December 16, 2021 at Avera St. Anthony’s Hospital in O’Neill, Ne. Condolences maybe directed to family at www.snidermemorialfh.com Frances Ann Anson was born September 30, 1953, to John and Lois (Hawk) Slizoski at O’Neill, Nebraska. She attended school in Ewing and graduated with the class of 1971. On February 25, 1977, Frances was united in marriage to Dennis Anson. They had two children, Kimberly and John. In 1982 they purchased Southfork Bar and ran the business together until their divorce in 1984. She was employed at Terra Fertilizer Plant, Hobbs Farms, and O’Neill Auto over the years and in 2012 she started working with her sisters at Anson Electric. Frances was a fun-loving woman who enjoyed life. She had a wonderful sense of humor and a quick wit. She enjoyed hunting and fishing. Crossword puzzles, slot machines, winning keno numbers, and games on her laptop were part of her favorite activities. She was a huge John Wayne fan and had an impressive collection of his things. But most of all, she loved watching her grandchildren and nieces and nephew’s activities and she looked forward to the yearly Labor Day Sister’s trip. Frances leaves behind her daughter, Kimberly (Dustin) Strong of O’Neill and her son, John Anson of Ewing. Grandchildren: Hunter Smith, Emma Smith, Tessa Janek, and Karnie Becker. Brother-in-law: Chuck Ritz of Comstock, NE. Sisters: Susan Wright, Rita (Terry) Anson, Gina (Kevin) Koenig all of Ewing and several nieces and nephews. She was preceded in death by her parents and her older sister Cynthia Ritz.

The family of Frances Ann Anson created this Life Tributes page to make it easy to share your memories.

Funeral Service for Frances Anson age 68 of Ewing, Nebraska will...