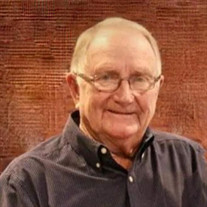 Funeral Service for Gale Rittscher age 79 of Clearwater will be 10:00 a.m. Wednesday, May 19, 2021 at Snider Memorial Funeral Home in Clearwater with Pastor Bruce Phillips, officiating.  Burial will be in Laurel Hill Cemetery in Neligh.  Visitation will be Tuesday, May 18, 2021 from 4:00 p.m. to 7:00 p.m. at Snider Memorial Funeral Home in Clearwater.  Gale passed away May 14, 2021 at Faith Regional Hospital in Norfolk.  Condolences may be directed to the family at www.snidermemorialfh.com In lieu of flowers, memorial may be directed to the family for later designation. Gale Ernest Rittscher was born December 1, 1941 to Ernest and Creta (Caubarrus) Rittscher on the family farm south of Clearwater, NE, where he and his wife made their life together. Gale was baptized April 1, 1956 at the Antelope Creek Church. He attended country school District 70 and graduated from Neligh High School in 1959. On February 18, 1961, Gale was united in holy matrimony to Shirley Lyons in Sioux City, IA. Gale farmed south of Clearwater, first with his brother, Allan and then with his son, Jason. He was an active member of the United Methodist Church in Clearwater. Gale loved farming, spending time with his grandchildren and great grandchildren, fishing and hunting (especially his elk hunting trips with his brother, Ron), camping, trying unique recipes with his brother, Gordon, watching his son-in-law and grandson race, playing cards in town, swapping gardening tips with his sister, Sharalyn, evening drives to get ice cream for his wife and his dog “Pugs”, and all Husker sports. Throughout the years, he especially enjoyed watching his children, then grandchildren, and then great-grandchildren play sports and perform in activities. Gale was well known in the community for his ability to talk to anyone as well as his passion for giving people a hard time. He always had a story, sometimes a slightly tall tale to tell. Gale always went out of his way to help others;  he would be the first to lend a helping hand in times of need. He is survived by his wife of 60 years, Shirley; children Rhonda (Jim) Kimmel of Norfolk, NE; Renee (Mike) Uldrich of Fairmont, NE; Gay Deanne (George) Funk of Mesa, AZ; and Jason (Sarah) Rittscher of Elgin, NE; 10 grandchildren: Nic (Sarah) Kimmel, Jordon Uldrich, Chandler (Sabrina) Uldrich and Rachelle Uldrich, Katie, Matthew and Sarah Funk, and Ava, Sophie and Ian Rittscher; along with 2 great grandchildren: Gage Kimmel and Maeli Uldrich; brother, Ron (Judy) Rittscher of Gothenburg, NE; sister Sharalyn (Rich) Wells of Brunswick, NE; sisters-in-law Alice Rittscher of Battle Creek, NE,  Brenda Rittscher of Clearwater, NE, and Lorraine Kallhoff of Omaha, NE; brothers-in-law, Jim (Helen) Lyons of Oakdale, NE and Bill (Alice) Lyons of Neligh, NE, along with many nieces and nephews. Gale was preceded in death by his parents; father and mother-in law; brothers, Allan and Gordon; brother-in-law, Milton Kallhoff; and grandson, Andrew Kimmel.

Funeral Service for Gale Rittscher age 79 of Clearwater will be 10:00 a.m. Wednesday, May 19, 2021 at Snider Memorial Funeral Home in Clearwater with Pastor Bruce Phillips, officiating.  Burial will be in Laurel Hill Cemetery in Neligh.  Visitation... View Obituary & Service Information

The family of Gale Ernest Rittscher created this Life Tributes page to make it easy to share your memories.

Funeral Service for Gale Rittscher age 79 of Clearwater will...

Send flowers to the Rittscher family.