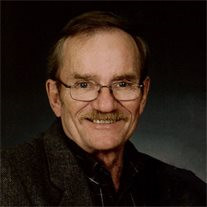 Funeral Services for Gary Meier age 64 of Orchard, were 10:30 a.m. Friday, April 12, 2013 at St. Peter's Lutheran Church in Orchard, NE with Rev. Marcel Kohlmeyer, Officiating. Music was provided by Lynae Stelling, Organist and Pastor Jon Sollberger, guitarist. Burial in Ewing City Cemetery in Ewing with Military Rites by Orchard Legion Post #136. Pallbearers were Larry Meiras, Merlyn Maple, Christopher O'Brien, Kurt Bravo, Mike Barlow, Kevin McConnell, Chaedric Meier, and Christopher Brummels. Visitation was from 5:00 to 8:00 p.m. Thursday, April 11, 2013 at Snider Memorial Funeral Home in Clearwater. Gary passed away Monday, April 8, 2013 at Avera Sacred Hospital in Yankton, SD. Gary A. Meier was born on July 22, 1948 at Ft. Collins, CO to Lawrence and Charlotte (VanSlyke) Meier; he was a twin. He grew up at Randolph, NE and attended St. Frances Grade School graduating from Randolph Public High School in 1966. He was enlisted into The United States Army from 1967 to 1970, spending time in Texas, Virginia, and Germany. After the service, He went to College at Kearney State (UNK) and graduated in May of 1975 with a BA, History Major and a Geography Minor. On, August 28, 1971 he was united in marriage to Cheryl Brummels. Three daughters were born, Catherine, Rebecca, and Rachael. Gary taught school from 1977-1978 in Orchard, NE. He then worked as a plumber, in construction, and as salesman. He was a sales representative for Danco, a plumbing supply company in Nebraska, Iowa and South Dakota from 1995 till 2012. He was a member of St. Peter Lutheran Church in Orchard, NE. Gary enjoyed camping, fishing, woodworking, and spending time with his grandchildren. He is survived by his wife, Cheryl. Children: Catherine and husband, Chris O'Brien of Duluth, MN, Rebecca and husband, Kurt Bravo of Papillion, NE, and Rachael and husband, Mike Barlow of Orchard, NE. Five grandchildren: Riley, Jack, Tessa, Dylan, and Kate. Brothers and Sisters: Dennis and Chong Meier of Street, MA, Dwayne and Sara Meier of Pueblo, CO, Connie and Roger Tufte of Watertown, SD, Mary Nelson (his twin) of Sioux City, IA, and Rhonda and Brad Kobold, of Salix, IA. He was preceded in death of his parents.

The family of Gary Anthony Meier created this Life Tributes page to make it easy to share your memories.