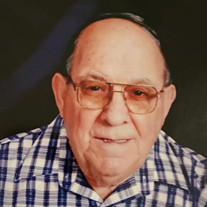 Funeral Service for Gary D. Clemens, age 86, of Neligh will be 10:30 a.m. on Saturday, June 5, 2021 at St. Francis Catholic Church with Fr. Patrick Nields, officiating. Visitation will be from 5:00 to 7:00 p.m. Friday, June 4, 2021 at St. Francis Catholic Church with wake service and rosary at 7:00 p.m. Burial Will be in Laurel Hill Cemetery in Neligh with Military Rites by Neligh American Legion Post #172 and VFW #5287. Beyer Snider Memorial Funeral Home is handling the arrangements. Gary passed away Monday, May 31, 2021 at Antelope Memorial Hospital in Neligh. Condolences may be directed to the family at www.beyersnidermemorialfh.com In lieu of flowers, Memorials can be given to St. Francis Church in Neligh Gary Delayne Clemens was born October 22, 1934 to Homer and Verna Clemens in Neligh, Nebraska. He attended Neligh High School and was drafted in the United States Army on June 4, 1957. He was honorably discharged on march 27, 1959. Most of his military time was spent in Germany. After his military duties were fulfilled Gary worked in shoe repair shops in Norfolk and Lincoln and then moved back to Neligh to take care of his mother, who was confined to bed, and he opened his first shoe repair shop. On August 24, 1963 Gary married Milly Clemens at St. Francis Catholic Church in Neligh. He was baptized and confirmed in the Catholic Faith by Fr. Charles Brodersen, (who also had married them), on their 20th wedding anniversary, August 24, 1983. Gary and Milly adopted two young boys, Robert Lynn and David Anthony. Gary was employed at Antelope Memorial Hospital in the laundry and maintenance department for over 20 years, and most of this time kept his shoe repair and retail boot sales shop open. Collecting coins, hunting, target shooting, and some fishing along with some quick trips to a casino filled his spare time. Gary is survived by his wife of 57 years, Milly of Neligh. Sons, Robert Lynn (Linda) and David Anthony, three step grandchildren and 5 step great grandchildren, a sister Sally Drew and many nieces, nephews, and friends. Gary was preceded in death by his parents, 4 brothers; Vesper, Richard, Lyle, and Dean and one sister, Evangeline and nephews, Jim Clemens and Kevin Clemens.

The family of Gary Delayne Clemens created this Life Tributes page to make it easy to share your memories.

Funeral Service for Gary D. Clemens, age 86, of Neligh will be...

Send flowers to the Clemens family.