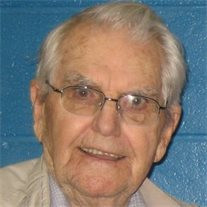 Graveside Services for Hans Edmund (Ed) Vackiner, age 94 of Ewing, will be at a later date in Snyder, NE, per his request there will be no funeral. He passed away on June 29, 2015 at the Golden Living Center in O'Neill, NE. Snider Memorial is handling arrangements. Memorials can be made to the Ewing Fire and Rescue. Hans Edmund (Ed) Vackiner was born on November 16, 1920 to Anna (Stehling) and Hartman Vackiner in Cassel, Germany. They emigrated to America when Ed was three years old, first to Paxton, SD, then to Snyder, NE, where Ed's father was a blacksmith, farrier and later an implement dealer. Ed attended school in Snyder. He entered the United States Navy on February 3, 1942 and was honorably discharged on Jan 28, 1946 with rank of Radioman 1st Class. He received his Bachelor's degree from Midland College in 1948 and on August 14th, 1948 he was united in marriage to Betty Lou Mallette. He worked for Burroughs Adding Machine Company in Omaha before beginning his banking career in Prague NE. They adopted their son Jeff at two months of age while living in Scribner in 1960. His career took them to many communities before settling in Ewing where he worked for Farmers State Bank from 1976 until retiring in 1990. Ed was a member of the Ewing American Legion Sanders Post #214 and was a charter member of the Summerland Gold Course, where Ed and Betty spent many happy days teaching their grandsons to golf. He was a voracious reader, keeping the Ewing library busy, and made many friends as a ham radio operator. He and Betty loved to travel, and enjoyed their bus trips to Husker Games with friends. He was a history buff and loved to keep in touch with his relatives in Germany. His first love was fishing, passing his retirement years at water's edge, a lifetime sport cherished by his son and grandsons. Although he was a banker, his son and grandsons all ended up cowboys, something he never quite figured out, but said at least they all could fish. Ed is survived by Betty of Ewing, his wife of 66 years; his son Jeff and wife Jean of Cody NE; grandsons Cade of Mullen NE, Clay of Denton NE and Chance of Clearfield, SD. He is also survived by sister in laws Donna (LaVerne) Lamprechet of Fremont NE and Helen Mallette of Blair, NE. He was preceded in death by his parents and brothers-in-law Bob Schafersman and Pat Mallette.

Graveside Services for Hans Edmund (Ed) Vackiner, age 94 of Ewing, will be at a later date in Snyder, NE, per his request there will be no funeral. He passed away on June 29, 2015 at the Golden Living Center in O'Neill, NE. Snider Memorial... View Obituary & Service Information

The family of Hans Edmund "Ed" Vackiner created this Life Tributes page to make it easy to share your memories.