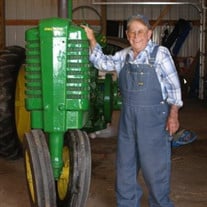 Funeral Services for Harlan Good age 90 of Clearwater, Ne will be 10:30 a.m. Wednesday, May 11, 2022 at Snider Memorial Funeral Home in Clearwater with Rev. Rodger Good, Officiating. Visitation will be 5:00 p.m. to 7:00 p.m. Tuesday, May 10, 2022 at Snider Memorial Funeral Home in Clearwater. Burial will be in Laurel Hill Cemetery in Neligh, NE with Military Rites conducted by Neligh American Legion Post #172 and VFW #5287 and Legion Riders. Snider Memorial Funeral Home is handling arrangements. Harlan passed away May 7, 2022 at Antelope Memorial Hospital in Neligh. Condolences may be directed to the family at www.snidermemorialfh.com Harlan Dean Good was born on August 8, 1931 to Joseph “Paul” and Roma (Harbottle) Good at Ewing, Nebraska. He started farming with his dad at the age 10 and attended Neligh High School and graduated with the Class of 1949. He enlisted in The United State Army on June 10, 1952 in Omaha, Nebraska and was discharged from Camp Carson Colorado on May 26, 1954. On February 24, 1957 he was united in marriage to Shirley Vollbrecht in Neligh, Nebraska. He continued farming with his dad and later purchased the farm from his parents. Harlan grew up and lived in the same neighborhood all his life. Harlan had a great sense of humor, loved reading, antique tractors, going to the fair, and listening to the markets and livestock reports; he even was contracting his corn from the nursing home. He enjoyed spending time with his family and teasing his grandkids. He was a member of Neligh American Legion, Blaine Township Board, District #38 school board and rural fire board. He is survived by his wife of 65 years Shirley Good of Clearwater, NE. Son, Sam and wife, Susan Good of Madison, VA and daughter, Susan and husband, Mark Cooper of Norfolk, NE. Grandchildren, Levi Cooper, Sarah Koler, Nic Young, Brady Cooper, Josh Good, and Jake Good; and 5 great grandchildren. Brother, Lloyd “Buzz” and wife, Darlene Good of Neligh, NE. Sister, Jan Good of Norfolk, NE. Preceded in death by his parents, aunts, and uncles.

The family of Harlan Dean Good created this Life Tributes page to make it easy to share your memories.

Funeral Services for Harlan Good age 90 of Clearwater, Ne will...

Send flowers to the Good family.