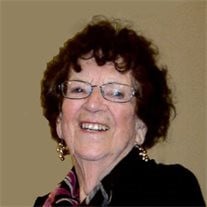 Funeral Services for Helena R. Kaczor, age 100 of Ewing, Ne were at 10:30 a.m. Tuesday, November 18, 2014 at St. John's Catholic Church of Rural Clearwater, Ne with Father Richard Reiser, Officiating. Visitation was Monday, November 17, 2014 from 5:00 to 7:00 p.m. with a 7:00 p.m. Wake Service at St. John's Catholic Church. Music was provided by Mark and Julie Dwyer. Burial was at St. Patrick's Cemetery. Pallbearers were Nick Kaczor, Brian Kaczor, Jeremy Mrsny, Austin Mrsny, Jeff Krebs, and Jason Krebs. Helena passed away on Saturday, November 15, 2014 at Boone County Health Center in Albion, Ne. Snider Memorial Funeral Home is handling arrangements. Helena Rose Kaczor, daughter of John and Anna Sehi, was born April 9, 1914 in rural Clearwater, Ne. Helena was the last survivor of her 13 siblings. She spent her entire life in the St. John's community of rural Clearwater, and was the oldest parishioner of that Catholic Church. She was a lifetime member of the Christian Mother's. St. Jude was one of her favorite patron Saints that she was always praying to. Her father, John, was one of the founding fathers. Helena was united in marriage to Tommy Kaczor in the fall of 1941. Their union was blessed with 5 children. They resided in Holt County, South of Ewing, all of their married lives, where they were both engaged in farming and ranching. Her greatest priorities in live were caring for her lawn, flowers, garden, baking, playing cards, and driving her little white mustang. These were some of her greatest joys. Survivors include 5 children and their families, Lois Schmitt (Bill) of Fort Collins, CO, Bonnie Krebs (Harlan) of Neligh, NE, Gary Kaczor (Cheryl) of Ewing, NE, Bill Kaczor (Mary) of Ewing, NE, and Becky Mrsny of Fort Collins, CO. She had 12 grandchildren, and 20 great grandchildren, all who loved her dearly. Helena was preceded in death by her husband, Tommy, who died in October 1980.

The family of Helena Rose Kaczor created this Life Tributes page to make it easy to share your memories.

Send flowers to the Kaczor family.