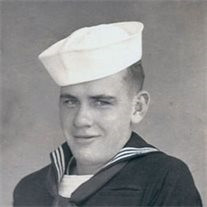 Funeral Services for James R. Wiegand, age 88 of Neligh were at 2:00 p.m., Saturday, December 14, 2013 at Church of Christ in Neligh with Pastor Bob Dainton, Officiating. Music was provided by Rita and Bob Kester. Military Rites conducted by Clearwater American Legion Post #267. Burial was in the Fairview Cemetery southwest of Clearwater. Pallbearers were David Wiegand, James Gray, Gabriel Wiegand, Benjamin Wiegand, Robert Napier, and Bruce Flenniken. Visitation was from 5:00 to 7:00 p.m., Friday, December 13, 2013 at Snider Memorial Funeral Home in Clearwater. James passed away Tuesday, December 10, 2013 in Neligh. James Richard Wiegand was born on April 12, 1925 to Fred and Georgiana (McGee) Wiegand in Neligh, NE. He grew up in Clearwater and attended school in Clearwater and graduated with the class of 1942. He continued his education by going to the American Welding Institute. On May 10, 1943 he was united in marriage with Doris Fuller at Center, NE. He worked at Commercial Iron Works in the shipyard as a welder in Portland, OR. James entered the United States Navy on August 2, 1943 in Omaha, NE and was discharged in January 8, 1946 at St. Louis, MO. After the service he began farming northwest of Clearwater for most of his life. Doris and James were married for 68 years at the time that Doris passed away in 2011. James and Doris were members of the Golden Tones, they helped out with the food pantry in Neligh, and for many years they would go out to the Neligh Nursing home and provide Sunday Church Services. He liked playing cards, bowling, and spending time with family, especially his grandsons and great grandsons. James was a member of the Clearwater American Legion for 62 years , Veterans of Foreign Wars and the Church of Christ in Neligh. He is survived by his daughter, Catherine Gray of Neligh, Ne. grandsons, David and wife Dawn Wiegand of Neligh, and James B Gray of Neligh, and great grandsons, Gabriel and Benjamin Wiegand. Preceded in death by Parents and his wife, Doris. Son, Richard. Sister, Doris Knievel.

The family of James Richard Wiegand created this Life Tributes page to make it easy to share your memories.

Funeral Services for James R. Wiegand, age 88 of Neligh were...

Send flowers to the Wiegand family.