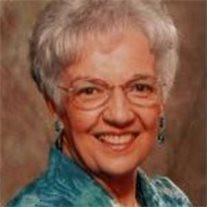 Jo Ann Dallegge Bartlett--- Funeral services for Jo Ann Dallegge, age 69, of Bartlett will be at 10:00 a.m. Friday, April 13, 2007 at the Bartlett United Methodist Church with Pastor Dean Pofahl officiating. Burial will be in the Bartlett Cemetery. Visitation will be from 5:00 p.m. to 8:00 p.m. Thursday, April 12, 2007 at the church. Jo Ann passed away Monday, April 09, 2007, at Avera St. Anthony�s Hospital in O�Neill. Snider Memorial Funeral Home of Elgin is conducting the funeral services. Memorials may be directed to Avera St. Anthony�s Hospital, O�Neill. Condolences may be sent to www.snidermemorial.com Jo Ann (Martin) Dallegge was born July 28, 1937, the daughter of Earl O. and Valeria Mae (Bobbitt) Martin at Bartlett, Nebraska. She attended school at District #25 and Wheeler County High School in Bartlett, graduating with the class of 1955. On May 21, 1955, Jo Ann was united in marriage to Dale Owen Dallegge. The small wedding ceremony took place in her parents� home in Bartlett and was conducted by her father, Wheeler County Judge, Earl O. Martin. Her mother, Mae Martin, and Dale�s mother, Clara Dallegge, were witnesses to their wedding. Born to this union were four daughters, Cynthia Loree, Patricia Louise, Debra Danette, and Barbara Lynn. Dale and Jo Ann lived in Columbus, NE, for several years. In April of 1959, they moved to Bartlett. In July of the same year they moved to the Thunderbolt Ranch northwest of Bartlett. In April of 1962, they moved to Santa Maria, CA. In December of 1963, they moved to Grand Island, NE, returning to Bartlett in1965. Jo Ann began working as legal secretary for James J. McNally in 1971 and retired in January of 1990. Jo Ann enjoyed participating in numerous community activities. She was a member of the Bartlett United Methodist Church and UMWF, Bartlett American Legion Auxiliary, Clover Blossom Club and Garden Club. She greatly enjoyed participating in a Prayer and Share group with some of her beloved friends. Her greatest wealth in life was the love that she quietly shared with the Lord and her family. One of her happiest rewards in life was showing kindness to elderly friends within the community. She is survived by her beloved husband Dale, who has so fondly cared for her, and four loving daughters: Cindi Troester of Lincoln and her children Derek and Tia; Patti and husband, Kevin Bridges of Omaha, and their daughters, Kelsey and Jaime; Debbi and husband, Brian Barelmann of O�Neill, and their children, Brian (BJ) and Dani; Barbi and husband, Judd Meneely of Atlantic, IA, and their sons, Chet and Blake. She was preceded in death by her parents, two brothers, Wallace and Robert, and two sisters,Vivian Sturek and Vina Taylor.

The family of Jo Ann Dallegge created this Life Tributes page to make it easy to share your memories.

Send flowers to the Dallegge family.