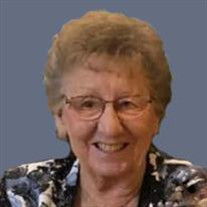 Funeral services for Joan C. Stearns age 84 of Clearwater, NE will be 10:30 a.m. Saturday, February 15, 2020 at St. John’s Catholic Church of rural Clearwater with Father James Kramper, Officiating.  Burial will be in St. Patrick’s Catholic Cemetery.  Visitation will be 5:00 p.m. to 7:00 p.m. Friday, February 14, 2020 with a 7:00 p.m. Wake service at St. John’s Catholic Church.  Snider Memorial Funeral Home in Clearwater is handling the arrangements.  Joan passed away February 12, 2020 at Antelope Memorial Hospital in Neligh, NE.  Condolences may be directed to the family at www.snidermemorialfh.com  In lieu of flowers memorials are suggested to the family for future designations. Joan Cecelia Stearns (Mlnarik) daughter Joseph F. and Cecelia H. Mlnarik was born on July 30, 1935 at their home south of Ewing. She grew up on her parent’s farm, graduated Ewing High School in 1952, and attended Wayne State College. On May 24, 1955, she was united in marriage to Samuel J. Stearns at St. John’s Catholic Church; they were married for 42 years. They spent their first years' of married life in Norfolk, NE. In 1958, they moved to the farm southwest of Clearwater where she lived the rest of her life. She was a member of St. John’s Catholic Church and the Christian Mothers. Joan enjoyed helping Sam on the farm, gardening, her famous pumpkin patch, and playing cards with her lady friends. She loved spending time with her family, especially with her grandchildren and great-grandchildren; the coffee pot was always on and the candy drawer was always full. Preceded her in death were her parents and husband, in-laws: Homer and Sylvia Stearns, granddaughter: Jamie McKillip, brother-in-law: Clet Thramer, and nephew: Tim Thramer. Survivors included two sons and their wives: Ronald and Judy Stearns and Steve and Michelle Stearns all of Clearwater, two daughters and their husbands: Shelia and Dan Bleyhl of Omaha and Mary and Dennis McKillip of Elgin. She is also survived by nine grandchildren: Barry (Mandy) Stearns, Alexander (Shannon) Bleyhl, Anna Bleyhl, Andrew Bleyhl, Christopher (Natalie) McKillip, Samantha (Ryan) Wullschleger, Jesse McKillip, Ashley and Katie Stearns. Five great-grandchildren: Barrett and Colton Stearns, and Parker, Mason, and Everly McKillip. Her brothers and sisters: Yvonne Thramer of Ewing, Clarie (Vern) Friese of Ralston, John (Barbara) Mlnarik of Clearwater, Richard (Mary Lois) Mlnarik of O’Neil, and Thomas (Sue) Mlnarik of Ewing.

The family of Joan Cecelia Stearns created this Life Tributes page to make it easy to share your memories.

Send flowers to the Stearns family.