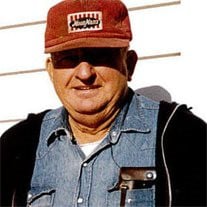 Funeral Service for John RIx age 89 of Neligh formally of Clearwater were at 10:30 am Saturday, March 26, 2016 at Snider Memorial Funeral Home in Clearwater, NE with Pastor Bob Dainton, Officiating. Music was provided by Bob and Rita Kester. Burial was at Clearwater Cemetery with Military Rites conducted by Clearwater American Legion Post #267. Pallbearers were Andy Ahlers, Ryan Ahlers, Wayne Ahlers, Brett Rix, Matt McMullen, and Tyler Hubert. Visitation was 5:00 to 7:00 Friday, March 25, 2016 at Snider Memorial Funeral Home in Clearwater, NE. John passed away Monday March 21, 2016 at the Willows in Neligh, NE. Snider Memorial Funeral Home handled the arrangements. John Rix was born on June 24, 1926 to Henry and Anna (Gehl) Rix at Omaha, NE. He attended school in rural Omaha area till the 8th grade. He was drafted in the United States Army on April 25, 1945 till December 7, 1946. John ran caterpillar for himself in the Bennington area. On October 23, 1948 he was united in marriage to Thelma Mackeprang at Zion Lutheran Church in Bennington, NE to this marriage they had 4 children. They lived in the Bennington and Omaha area where he farmed. They moved to Clearwater in 1960 where he continued to farm and drive truck. He enjoyed farming, "fixing things". Him and Thelma enjoyed playing cards, dancing, traveling, and bowling together. He enjoyed spending time with his grandkids and great grandkids and his dog "Jake". He was a member of Clearwater American Legion. He is survived by his son, Steve Rix of Clearwater, NE. Daughters: Sandy and husband, Michael McMullen of Tekamah, NE and Kathy and husband, Steve Ahlers of Clearwater, NE. 8 grandchildren and 22 great grandchildren. Brother-in-law, Bill Plugge of Kennard, NE and sister-in-law, Marsha Scheming of Tucson, AZ and nieces and nephews. Preceded in death by his parents. His wife in May 15, 2013. 1 son, Jerome and great granddaughter, Allison Hubert both at infancy. Condolences may be directed to the family at www.snidermemorialfh.com

The family of John Rix created this Life Tributes page to make it easy to share your memories.

Send flowers to the Rix family.