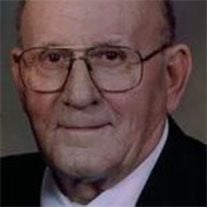 Joseph G. Funk Ewing--- Funeral services for Joseph G. Funk age 80 of Ewing will be at 10:30 am, Thursday, January 3, 2008 at St. John�s Catholic Church in rural Clearwater. Burial will be in the St. Patrick�s Cemetery. Visitation will be from 5:00 to 8:00 pm, Wednesday, January 2, 2008 and there will be a 7:00 p.m. Rosary at the church. Joe passed away Monday, December 31, 2007 at Golden Living Center in Neligh. Snider Memorial Funeral Home of Clearwater is conducting the services. Condolences may be sent to the family at www.snidermemorial.com Joseph George Funk was born on March 2, 1927 to Paul and Rose (Burk) Funk in rural Ewing. He attended country school # 131 and then Graduated from Ewing High School in 1946. He was united into marriage to Georgine Dozler on November 29, 1951 at St. Boniface Catholic Church in Elgin. Joe was a farmer and carpenter for most of his life. Gardening became his new hobby after retiring at age 55. He was a member of St. John�s Catholic Church. He is survived by his wife Georgine; his children Joe & his wife Jayne Funk of Neligh, NE, Ken & his wife Rozanne Funk and Dan & his wife Debbie Funk both are from Norfolk, NE, George & his wife Gay Deanne Funk of Mesa, AZ, Jeff & wife Anne Funk of Roca, NE. 19 Grandchildren and 2 Great Grandchildren. His Brothers Art Funk of Battle Ground WA, Vic Funk of Ewing. A Sister-in-Law Rita Funk of Ewing, Sister Helen Van Wey of San Diego, CA, Brother-in-law Joe & Lucy Knievel of Neligh. He is preceded in Death by his Parents Paul & Rose, Daughter Beverly, Sister Rose Pofahl and Theresa Knievel, Brother Ed Funk.

The family of Joseph G. Funk created this Life Tributes page to make it easy to share your memories.

Send flowers to the Funk family.