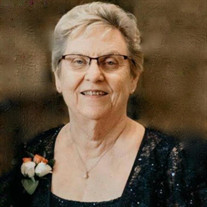 Funeral Services for Judith L. Napier, age 82 of Lincoln, NE, will be held on 11:00 a.m. Wednesday, December 1, 2021 at United Methodist Presbyterian Church in Ewing, NE with Craig Huffman, officiating. Visitation will be held an hour before service Wednesday, December 1, 2021 at the church. Burial will be in Ewing City Cemetery. Judy passed away on November 26, 2021 in Lincoln. Condolences may be directed to the family at www.snidermemorialfh.com. In lieu of flowers memorials may be directed to Calvin Crest Camp 2870 County Rd 13, Fremont, NE 68025 Judith Louise Napier was born on March 19, 1939 to Irvin and Ruby (Timmerman) Cloyd at Ewing, Nebraska. She attended school in Ewing and Ewing High School and graduating with the Class of 1957. On August 30, 1959, she married her high school sweetheart, Russell Napier in Ewing and their devotion to each other over 62 years was a constant reminder of that love. They spent time in Sterling, Kansas and started their family there as Russ attended college. They returned to Nebraska in 1968, and spent 6 years in Atkinson, where Judy worked at the feed store, and was involved in a variety of activities through the church and community, including mariners and the iris club. When they were called to serve at Camp Calvin Crest near Fremont, Nebraska in 1974, she took on the role that she would keep until her retirement, which was administrative assistant and office manager for Russ, as he navigated 20 years as the administrator there. She balanced the busy lives of their 3 children and her camp duties with grace, professionalism, and love. Russ relied on her in both aspects of that life, and with her at his side, he could always be confident that no matter what he wrote and gave to Judy, it would be meticulously edited, and not a spelling error would be found. This was one of the ways in which they complimented each other in life, he as the outgoing person who never met a stranger, and she at his side working out all the details and organizing things behind the scenes. They had a rich life together at Calvin Crest, and have many great memories and life long friends from that time in their lives. They moved to Highlands Presbyterian camp in Allenspark, Colorado in 1994 to continue their ministry together, then retired to Lincoln, Nebraska in 2005. Judy loved to spend time with family, loved to puzzle and play games with her kids and grandkids. She spent many hours researching family history and tracing the genealogy of the Cloyd and Napier families. She and Russ enjoyed traveling, and spent several years exploring the country in their RV. Their many pictures and stories were a source of joy to her, and we will continue to share those memories and stories as a family as we remember her. She will also forever be a Husker fan, and we will all cheer a little extra in her memory as we watch every game. She is survived by her husband Russ, 3 kids, Keith (Kathy) Napier of Pinetop, Arizona, Mark (Magali) Napier of Lincoln, Amy (Jeremy) Vejraska of Kirbyville, Missouri, 8 grandchildren, and 4 great- grandchildren. She also leaves behind a sister, Beulah Garhart of York, NE and a brother, Ron (Marit) Cloyd of York, NE., sister-in-law Loretta Napier of Ewing, NE; along with a loving family of nieces, nephews, and extended family. She was preceded in death by parents Irvin and Ruby Cloyd, brother, David Cloyd, and half sister Winefred Bahm.

Funeral Services for Judith L. Napier, age 82 of Lincoln, NE, will be held on 11:00 a.m. Wednesday, December 1, 2021 at United Methodist Presbyterian Church in Ewing, NE with Craig Huffman, officiating. Visitation will be held an hour before... View Obituary & Service Information

The family of Judith Louise Napier created this Life Tributes page to make it easy to share your memories.

Send flowers to the Napier family.