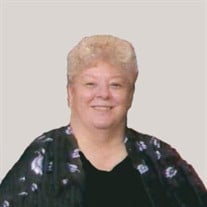 Graveside Service for Karen K. Williams age 79 of Neligh will be at 11:30a.m. April 16, 2022 at Ewing City Cemetery. Snider Memorial Funeral Home in Clearwater, NE is handling the arrangements. Karen passed away October 2, 2021 at Antelope Memorial Hospital in Neligh. Karen Kay Williams was born on November 26, 1941 in Lynch, NE to Herman “Hap” and Sylvia (Misner) Gentele. She grew up in Naper, NE and graduated from High School in 1960. Right after graduation she enrolled in Norfolk Beauty School. Upon completion, she worked for three years at the three different salons. On September 22, 1963 Karen married Harold Williams in Valentine, NE. On July 16, 1964, they had their first child Monte. On July 7, 1965, they moved to Canon City, CO where they had their second child, Terri, on September 8, 1966. Karen was a stay at home mom for several years. In 1973, they moved to Lago Vista, TX. In 1976 Karen returned to the work force working for a company that was planning and building Lago Vista. In 1977, they moved to Marble Falls, TX where Karen worked for Northwood Healthcare Center as a medical records clerk. After Karen’s father passed away in November 1980 the family moved to Oxford NE to be closer to her mother. She worked at the nursing home in Oxford. In November 1985, they moved to Garden City KS. Karen worked at Briarhill Nursing Home as a medical record clerk. Karen retired in 2001, due to health reasons. In December of 2019, Karen began her stay at Arbor Care Center in Neligh, NE, where she loved playing bingo as well as many other activities. She enjoyed playing cards, singing in the church choir, reading, roller skating, and ice skating. Sewing, embroidery, and taught herself how to crochet. She enjoyed spending with family. Preceded in death by her parents, husband, Harold (2020), granddaughter Brook Brown, grandfather Leslie Misner as well as several aunts and uncles. Survivors include son, Monte Williams and wife, Ruth of Ewing, NE, daughter, Terri Foster of Junction City, KS; grandchildren: Timothy Williams, Adonis Williams, Kaytia Foster, and Heath Williams. Great grandchildren: Jaycen Herman, Allison, Raegan, Calliopy, and Catalina. Sister-in-law Connie (John) Schafer of North Platte, NE. Brother-in-law, Dave Schwanz, John, and Ron Bagwell.

The family of Karen Kay Williams created this Life Tributes page to make it easy to share your memories.

Graveside Service for Karen K. Williams age 79 of Neligh will...

Send flowers to the Williams family.