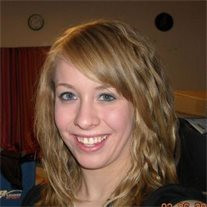 Memorial Services for Katarina Dawn Race age 19 of Bartlett, NE, was at 1:30 p.m. Saturday, March 26, 2011 at Wheeler Central High School Gymnasium in Bartlett, Ne with Pastor Nancy Tomlinson and Pastor Delano Cunningham, Officiating. Music was provided by Karen Kotrc and Jenita Qualm. Inurnment was in the Bartlett Cemetery. Honorary Pallbearers were Alex Petersen, Marcus Burki, Mark Smith, Phillip Smith, Travis Smith, and Cody Havel. Visitation was from 6:00 to 8:00 pm, Friday, March 25 , 2011 at United Methodist Church in Bartlett, NE. Katarina passed away Friday, March 18, 2011 at University of Nebraska Medical Center in Omaha, NE. Arrangements are being conducted by Snider Memorial Funeral Home of Elgin, NE. Katarina was born September 23, 1991 in Norfolk, NE to Mitch and Sarah LaVonne (Olson) Race. Katarina attended and graduated from Wheeler Central schools in Bartlett. She graduated in 2009 salutatorian of her class having been involved in volleyball, basketball, track, FFA and National Honor Society. She attended Chadron State College majoring in secondary math education with a minor in coaching. While at Chadron Katarina was involved in track, intramural volleyball, and working with children at the Child Development Center. Katarina, “Kat” to many of her friends was a very bubbly girl who made everyone around her smile. She always had something goofy to say to brighten your day and a personal strength beyond her years. She will be greatly missed by many. Katarina is survived by her parents, Mitch and Sarah LaVonne (Olson) Race, sister Casandra Race, grandparents Roger and LaDonna Race, Louie and Nina Satter, Jane Olson and numerous aunts, uncles, cousins and loving friends. Katarina was proceeded in death by her grandfather, Aubrey Olson.

The family of Katarina Dawn Race created this Life Tributes page to make it easy to share your memories.