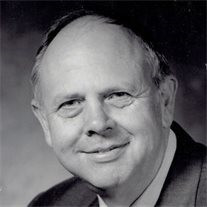 Funeral services for Kenneth A. Krohn age 76 of Neligh were 10:30 am, Friday, December 27, 2013 United Methodist Church in Neligh with Pastor Glenn Hubbard, Officiating. Music was provided by Jill Bates. Burial was at Laurel Hill Cemetery in Neligh. Pallbearers were Paul Malzacher, Curtis Malzacher, Roger Malzacher, Brian Malzacher, Robert McEntarffer, and J. Carey Taylor. No visitation. Beyer Snider Memorial Funeral Home is handling the arrangements. Ken died peacefully in the company of his wife and daughters December 20, 2013 in Omaha, Nebraska. Kenneth Austin Krohn was born August 21, 1937 to Elsie Mae (Malzacher) and Oscar E. Krohn in Omaha, Nebraska. He grew up in Neligh, Nebraska and graduated from Neligh High School. In 1959 he married Marie Kester and they raised two daughters: Alison and Kristin. Ken earned a degree in Business from the University of Nebraska, Lincoln and a Master's degree in Management from Northern Illinois University. After his undergraduate studies he served in the United States Air Force for eight years rising to the rank of Captain before pursuing a career in aerospace. He moved his family to Rockford, Illinois in 1968 to work for Sundstrand Aviation as a contract specialist. In 1997 he retired as Vice President of Customer Service and returned to Neligh . During his retirement, Ken chaired a committee that established the Shade-On Memorial in Riverside Park, volunteered with the Antelope County Historical Society, and operated a small book business: Elkhorn Valley Books. He enjoyed reading and collecting books, debating political issues at the breakfast table, and working with model trains. Ken died peacefully in the company of his wife and daughters December 20, 2013 in Omaha, Nebraska. He is survived by his wife Marie, sister Constance, daughters Alison and Kristin Krohn, sons-in-law Carey Taylor and Robert McEntarffer, and grandchildren Esme Krohn and Guy McEntarffer. Preceding Ken in death were his parents. Memorials should be given to the Neligh United Methodist Church

The family of Kenneth A Krohn created this Life Tributes page to make it easy to share your memories.

Send flowers to the Krohn family.