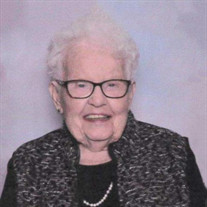 A Private Funeral Service for LaNora Taylor age 100 of Neligh. Burial will be in Laurel Hill Cemetery. Visitation will be Wednesday, July 15, 2020 at 5:00 to 7:00 p.m. at Beyer Snider Memorial Funeral Home in Neligh, Ne (family will not be present). LaNora passed away July 13, 2020 at Antelope Memorial Hospital in Neligh. Condolences may be sent to family at www.snidermemorialfh.com Memorials may be directed to the family (Pat Blackburn, POB 86, Neligh, NE 68756) for further designation. LaNora Rose Lehmann was born November 15, 1919 to Paul and Martha (Honeke) Lehmann in Stanton, NE. She was baptized November 30, 1919 at St. John Lutheran Church. She grew up on a farm east of Stanton. She attended St. John Lutheran grade School for 8 years and was confirmed in May 1932. She attended Stanton High School and graduated in May 1936 at the age of 16. In 1937 she returned for classes in chemistry and general science for nurses training. She graduated from Lutheran School of Nursing in Sioux City, IA in 1941. She was employed at the Tilden Hospital from 1941 to 1943. On April 18, 1943 she was united in marriage to Russel M. Taylor at Concordia Lutheran Church in Clearwater, NE. They were blessed with 4 children, Patricia, Paul, Kathryn, and a deceased baby Margaret Rose. LaNora was employed at Antelope Memorial Hospital for 35 years. She served in various positions throughout her career which included staff nurse, supervisor, and Director of Nursing with Methodist Hospital, Omaha student nursing program. She retired in November 1990. She organized an Antelope Memorial Retirement club known as the “Has Beens”, which still continues today. She enjoyed bowling, golfing, quilting, and especially enjoyed her family, friends, grandkids, and great grandkids. She was a longtime member of the Grace Lutheran Church, Mary-Martha LWML Circle Bible class. She moved to the Willows in 2014 and resided there until March 2020 then went to Arbor Care Nursing Home. She Celebrated her 100th Birthday November 16, 2019. Preceded in death by her husband Russell on December 14, 2007. Also, an infant daughter, her parents, sisters, Irene Kind, and Rose Papenhagen, and a step granddaughter. Survived by daughter, Patricia (Jim) Blackburn, son Paul (Betty) Taylor, Daughter Kathryn (Jim) Turner, 9 grandchildren, 4 step grandchildren, 15 great grandchildren, 4 step great grandchildren, 2 great great grandchildren, and many friends and relatives.

A Private Funeral Service for LaNora Taylor age 100 of Neligh. Burial will be in Laurel Hill Cemetery. Visitation will be Wednesday, July 15, 2020 at 5:00 to 7:00 p.m. at Beyer Snider Memorial Funeral Home in Neligh, Ne (family will not be... View Obituary & Service Information

The family of LaNora Rose Taylor created this Life Tributes page to make it easy to share your memories.

A Private Funeral Service for LaNora Taylor age 100 of Neligh....

Send flowers to the Taylor family.