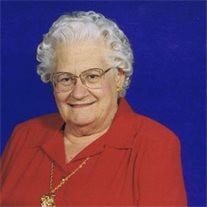 Funeral Services for Leona Schlecht age 83 of Clearwater were Monday, February 2, 2009 at 10:30 at Concordia Lutheran Church in Clearwater with Pastor Daniel Feusse, Officiating. Music was provided by Caroline Jaeke, Organist and Brenda James, Soloist. Pallbearers were Grandsons, Randy Schlecht, Jeff Schlecht, Adam Schlecht, Brian Riebesell, Brett Riebesell, and Scott James. Honorary Pallbearers were Granddaughters Brenda James, Angie Schlecht, and Kelsey Schlecht. Burial was in the Concordia Lutheran Church Cemetery. Visitation was from 4 to 8:00 p.m. Sunday, February 1, 2009. at Snider Memorial Funeral Home in Clearwater. Leona passed away on Friday, January 30, 2009 at Antelope Memorial Hospital in Neligh. Snider Memorial Funeral Home of Clearwater is handling the arrangements. Leona Dorothy Schlecht was born on May 11, 1925 to John and Minnie Mollhoff in Tilden, Nebraska. She was baptized and Confirmed at St. Paul�s Lutheran Church in Tilden. Leona attended School in Tilden and graduated from High School in 1942. On December 10, 1944, she was united into marriage to Victor Schlecht in Tilden. They made their home southwest of Clearwater, Nebraska. Leona recently became a resident of Golden Living Center in October 2008. Leona was a member of Concordia Lutheran Church. She was involved with many groups with the church such as Ladies Aide, Concordia Layman�s League, she taught Sunday school, was in the choir, and The Women's Missionary Leagues. Leona liked to do oil painting, reading, watching the birds, TV, music, games and puzzles. She liked traveling to the mountains. She is survived by her husband, Victor. Her daughter, Myrna and her husband Douglas Riebesell, of Mankato, Minnesota; Sons, Ray and his wife, Deb Schlecht and Rodney and his wife, Theresa Schlecht, all of Clearwater, Nebraska. 8 Grandchildren and 3 Great-Grandchilren. She is preceded in death by her parents, sister, Emma and her husband Louis Miller. Brothers; Paul and his wife Leola Mollhoff , Ervin and his wife Ellenor Mollhoff, and Grand-daughter Anne Marie Schlecht.

The family of Leona Dorothy Schlecht created this Life Tributes page to make it easy to share your memories.

Funeral Services for Leona Schlecht age 83 of Clearwater were...

Send flowers to the Schlecht family.