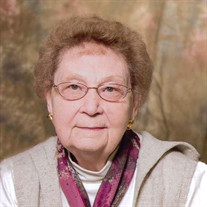 Funeral services for Nadene Hughes, age 89, of Neligh, NE, will be at 10:30 am on Saturday, January 8, 2022, at the United Methodist Church in Neligh, NE, with Pastor Bob Dainton officiating.  Burial in Laurel Hill Cemetery.  Visitation will be Friday, January 7, 2022, from 5:00 – 7:00 pm at Beyer Snider Memorial Funeral Home in Neligh.  Nadene passed away on December 19, 2021, at Pemberly Place Assisted Living in Lincoln.  Beyer Snider Memorial Funeral Home is handling arrangements.  In lieu of flowers, memorials can be directed to the Neligh Senior Center or the Neligh Cemetery Association.   Lillie Nadene (Fallesen) Hughes was born on September 10, 1932, to Holga and Hazel (Riley) Fallesen.  She attended rural schools east of Neligh and graduated at the age of 16 with the class of 1949 from Neligh High School.  After high school, Nadene worked for attorney Harold Rice.  On March 19, 1954, she was united in marriage to Gordon Hughes.  Nadene and Gordon devoted their lives to raising their family and operating a successful farming business in Antelope County.  In 1974, Nadene began working for the Department of Social Services and, shortly thereafter, was appointed Clerk of the District Court for Antelope County, a position she held for nearly 20 years.  Nadene volunteered for several organizations throughout her life, including the American Red Cross, March of Dimes, American Legion Auxiliary and Neligh Cemetery Association.  Nadene was a faithful disciple of Christ her entire life.  She was a devoted wife and mother, and she dearly loved spending time with her family.  She also enjoyed cheering on the Huskers in volleyball and football.   Nadene is survived by her five children: Dennis (Jean) Hughes of Lincoln, NE; Dawn (Jim) Zieg of Lincoln, NE; Kathy (Ken) Jisa of Lincoln, NE; Cheryl (Vern) Powers of Bennington, NE; and Lori (Nathan) Meisgeier of Omaha, NE; sixteen grandchildren and fourteen great grandchildren.  Preceded in death by her parents, husband Gordon, brothers Melvin Fallesen and Norman Fallesen, and sister Darlene Basel.

Funeral services for Nadene Hughes, age 89, of Neligh, NE, will be at 10:30 am on Saturday, January 8, 2022, at the United Methodist Church in Neligh, NE, with Pastor Bob Dainton officiating.  Burial in Laurel Hill Cemetery.  Visitation will... View Obituary & Service Information

The family of Lillie Nadene Hughes created this Life Tributes page to make it easy to share your memories.

Funeral services for Nadene Hughes, age 89, of Neligh, NE, will...

Send flowers to the Hughes family.