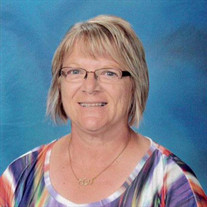 Funeral Service for Lori Schrader age 62, of Neligh will be 10:30 a.m. Tuesday, November 17, 2020 at St. Francis Catholic Church in Neligh, with Father Pat Nields, officiating.  Burial will be in Laurel Hill Cemetery.  Visitation will be 5:00 to 7:00 p.m. Monday, November 16, 2020 with 7:00 Wake service at St. Francis Catholic Church.  Social distancing and current Covid-19 DHM’s will be followed at both visitation and funeral.  Beyer Snider Memorial Funeral Home in Neligh is handling the arrangements.  Lori passed away on November 13, 2020 at Premier Estates in Pierce, Ne.  Condolences may be directed to the family at www.beyersnidermemorialfh.com In lieu of flowers, memorials can be directed to the family for later designation. Lori Lou Schrader was born on October 7, 1958 to Joseph and Betty (Bailey) Lennemann in West Point, Ne.  She attended grade school in Humphrey and Tilden and graduated from Elkhorn Valley High School with the Class of 1976.  She went on to Wayne State College and received her BA in Elementary Education with a specialization in specific learning disabilities.  On March 16, 1985, at Our Lady of Mount Carmel Catholic Church in Tilden, Lori was united in marriage to David Schrader. The couple was blessed with three children; Scott, Heather, and Annie. Prior to and immediately after her marriage, Lori had a successful teaching career that started in Windside, Ne. and concluded in Plainview, Ne. She retired from education in the spring of 2019 after 36 years of teaching. During her retirement, Lori found great joy in gardening, taking care of the lawn, reading, baking, and crafting.  Her greatest joy was any time spent with family and her two grandsons. Lori was a devoted Christian and long time member of the St. Francis Catholic Church in Neligh, Ne. She passed away Friday, November 13th, 2020, at Premier Estates in Pierce, Nebraska, at the age of 62.  She is survived by her husband, David Schrader of Neligh, NE. Children:  Scott Schrader of Neligh, NE; Heather Atkins, and husband, Sid of Battle Creek, NE; and Annie Schrader of Sioux Falls, SD. Two grandsons, Caleb and Ty Atkins. Sisters: Suzanne (Bob) Huerta of Omaha, NE; Jolene (Stan) Schapman of Tilden, Ne; Cheryl (Dennis) Sheets of Lincoln, NE; Sandra (Steve) Christiansen of Neligh, NE; Mary (Mark) Hecht of Tilden, NE; and Janet Lennemann of Woodstock, IL. Sister-in-laws: Arlee (Jim) Schaefer of Columbus, NE and Luann (Mark) Boche of Norfolk, NE;  and many nieces and nephews.      Lori was preceded in death by her parents, Joseph and Betty Lennemann and father-in-law and mother-in-law, Tom and Elaine Schrader.

Funeral Service for Lori Schrader age 62, of Neligh will be 10:30 a.m. Tuesday, November 17, 2020 at St. Francis Catholic Church in Neligh, with Father Pat Nields, officiating.  Burial will be in Laurel Hill Cemetery.  Visitation will be 5:00... View Obituary & Service Information

The family of Lori Lou Schrader created this Life Tributes page to make it easy to share your memories.

Send flowers to the Schrader family.