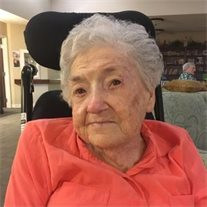 Funeral Service for Lucille Carpenter age 85 of Plainview will be 10:30 a.m. Thursday, August 3, 2017 at United Methodist Church in Neligh, with Pastor Bruce Phillips and Pastor Bill Gepford, Officiating. Burial will be in Laurel Hill Cemetery in Neligh, Ne. Visitation will be 5 to 8 p.,. Wednesday, August 2, 2017 at Beyer Snider Memorial Funeral Home in Neligh, Ne. Lucille passed away peacefully, Sunday, July 30, 2017 at Providence Place in Fremont, NE surrounded by family. Condolences may be directed to family at www.beyersnidermemorialfh.com Lucille Mae Carpenter was born on May 6, 1932 to John and Annie (Nelson) Jensen at Plainview, NE. She attended country school through 8th grade. She worked for the Vern Henery family for many years. On August 29, 1958 she was united in marriage to Eugene Carpenter in Norfolk, NE. She worked alongside him on the family farm for many years. Eugene passed away in 2003 in Neligh. Lucille remained on the farm until 2007. She moved to Providence Place in Fremont in 2013. Lucille enjoyed gardening, embroidering, cooking/baking/canning, playing pitch and caring for her animals. She was a member of VFW Post #5330 Auxiliary of Plainview and Stark Valley United Methodist Church. She is survived by her children: Joel and Diane Carpenter of Plainview, NE, Jerry and Char Carpenter of Neligh, NE, and Joelene and Robert Dredge of Fremont, NE. 8 grandchildren, 1 great granddaughter, brother-in-law Glenn and Sherry Carpenter of Vancouver, WA and many nieces and nephews. Lucille was preceded in death by her parents, husband Gene (2003), grandson Chad Carpenter (1993); her siblings Delbert Jensen, Dorothy Paulsen, Margaret York, Donnie Jensen, and Howard Jensen.

The family of Lucille Mae Carpenter created this Life Tributes page to make it easy to share your memories.

Funeral Service for Lucille Carpenter age 85 of Plainview will...

Send flowers to the Carpenter family.