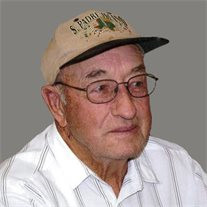 Funeral Services for Lyle K. Miller age 98 of Neligh, NE will be 10:00 Saturday, November 26, 2016 at Calvary Bible Church in Neligh, Ne. with Pastor Peter Sample and Pastor Al Seadore, Officiating. Visitation will be 6:00 to 8:00 Friday, November 25, 2016 at Beyer Snider Memorial Funeral Home in Neligh, NE. Burial will be in the Oakdale Cemetery. Beyer Snider Memorial Funeral Home of Neligh is handling the arrangements. Lyle passed away peacefully on Monday, November 21, 2016, at Antelope Memorial Hospital in Neligh. Lyle Kenneth Miller was born on February 22, 1918 near Elgin to William and Elizabeth (Smith) Miller. He attended Elgin High School and graduated with the Class of 1926. After riding the rails out west, working in Oregon and Washington state, he was united in marriage with the love of his life Lena Bennett on December 26, 1939 at the home of her parents near Neligh, NE. They lived on several farms in Antelope County before buying and moving to their farm north of Neligh. They had three children, Wayne, Leonard, and Connie. Lyle farmed, ran a bulldozer and built houses throughout his life to support his family. He panned for gold and treasure hunted to support this sense of adventure. For fifty years straight, Lyle would packed up his pickup with his gold pans, legends and dreams and head to Red River, New Mexico. He had a map and a story about a "side-walk" made out of gold. Every year, after the pickup was packed, Lyle would say, "This is it. This is the year we find it." As the years passed Lyle graduated from horses to dirt bikes to four wheeled ATVs. That last advancement happened when he turned seventy years old and Lena insisted that he give up taking his motor cycle up in the mountains alone. They compromised: Grandpa retired the two wheeled bike for a four wheeler, named George. Over the past 15 years Lyle tinkered building hydrogen cells in his garage. Even up to the last month. Always thinking. Always exploring. His love for the lord and God's word were very important to him. His well worn Bible set by the table and he read it every morning at breakfast. He looked forward to the day he would see his Savior. This is it, Lyle. This is the year. You've found that street of gold. You've found your treasure. Lyle is survived by two children, Leonard Miller of Neligh, NE and Connie and husband Ralph Schram of Alma Center WI; one brother, Gerald "Red" Miller of Norfolk, NE: nine grandchildren and 19 great grandchildren. Lyle was preceded in death by his wife of 65 years, Lena Miller; six brothers, Charlie, Burl, Bill, Paul, Clifford, Harold; and one son, Wayne Miller.

The family of Lyle Kenneth Miller created this Life Tributes page to make it easy to share your memories.

Send flowers to the Miller family.