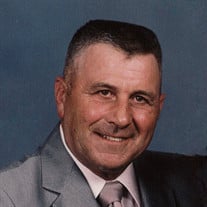 Memorial Service for Marcus E. Pierson age 84 of Clearwater, NE will be 10:30 a.m. Saturday, January 19, 2019 at United Methodist Presbyterian Church in Ewing with Pastor Bruce Phillips, Officiating. Inurnment will be at Ewing City Cemetery. Visitation will be Friday, 4:00 to 7:00 p.m. on January 18, 2019 at Snider Memorial Funeral Home in Clearwater. Condolences may be directed to the family at www.snidermemorialfh.com Memorial may be directed to the family for later designation. Marcus Earl Pierson was born on September 7, 1934 to Earl and Erma Mae (McClannahan) Pierson at the family home South of Ewing. Marcus graduated from Ewing High School with the Class of 1952. He attended Wayne State College for 2 years and while in college he joined the National Guard. He then enlisted in the United States Army and was stationed at Ft. Lewis in Washington State. While there, he met his first wife, Caroline Sue Woldridge they married on August 26, 1956. He worked for Boeing Aviation until the fall of 1959 helping manufacture the first 707 airplanes. He then moved the family back to Nebraska, where they lived on various farms South of Ewing until he purchased the home place North of Ewing in 1969. The family started milking cows in a brand new Grade A Barn that his father helped him build in 1970. In 1971 the family received the Nebraska Farm Family of the Year award. After selling his herd in the late 80's he worked for the Soil Conservation Service for 15 years until retiring in 2002. He married Rosemary (Long) on March 20, 1982. He and Rosemary opened their hearts and home to their 3 year old great nephew, Josh in 1995 and raised him as their own. He moved to Clearwater in 2014 to be closer to family. He served on the Township Board for many years. He was a proud member of FHA (Farmers Home Administration), Holt County Farm Bureau, Ewing Methodist Church, the Legion, and the Eagles Club, where he loved to volunteer his time bartending. He also served on the board of Associated Milk Producers Inc while he was active in farming. Marcus was very proud of his family, he loved telling stories, singing, spending time with his children and their families, playing cards, dancing, and was very well known for his humor and giving hugs. Survived by daughters: Julie (Doug) Lechner, of Grand Island, NE; Chyrel (Mike) Hall of Red Bluff, CA; Connie (Joe) Walz of Kearney, NE; Melodie (Chad) Funk of Clearwater, NE; and Annette (Rod) Palmer of Madison, NE; and his partner in crime, Krimson the Rescue Dog. 14 grandchildren, 24 great grandchildren, and 1 great great grandchild. Numerous nieces and nephews. Sister-in-law, Verde (Charlie) Thoene of Burwell, NE; brother-in-laws, Fred (Barb) Long of North Platte, NE and Lloyd (Sandy) Long of Vancouver, WA; sister-in-laws Pat Turner and Joanne (Don) Cress all of Shelton, WA. Preceded in death by his parents, Rosemary, his first wife, Caroline (Woldrige), Grand daughter Sasha Walz; son, Josh Lytle; sister, Deloris (PIerson) Pribnow and her husband, Marvin; and nephew Lee Pribnow.

The family of Marcus Earl Pierson created this Life Tributes page to make it easy to share your memories.

Send flowers to the Pierson family.