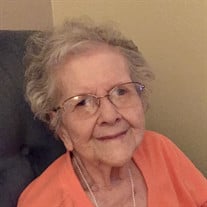 Funeral services for Maurine Filsinger age 92, of Fremont, NE will be at 1:30 p.m. Friday, January 31, 2020 at Snider Memorial Funeral Home in Clearwater. Visitation will be Friday, January 31, 2020, 12:00 p.m. until time of service at Snider Memorial Funeral Home in Clearwater. Maurine passed away Thursday, January 23, 2020 at her home. Snider Memorial Funeral Home in Clearwater is handling the arrangements. Condolences may be directed to the family at www.snidermemorialfh.com Margaret Maurine Filsinger was born on February 8, 1927 to Roy and Hazel (McDonald) Kimes at Clearwater, Nebraska. She grew up in the Clearwater area. She attended school at Clearwater and graduated from Clearwater with the class of 1945. On December 28, 1945 she was united in marriage to Merle Filsinger in Norfolk. They moved to Fremont in 1958. They were married for 64 years before Merle passed away 2009. She sold Avon and later became a district manager for Avon. She then was employed as a social worker at Eastern Nebraska Office on Aging. She was member of Fraternal Order of Eagles. She enjoyed shopping, doing crossword puzzles, listening to music, and feeding birds. Survived by her children: Sandy and husband Sam DePetro of Omaha, NE and Monty and wife Tillie Filsinger of Fremont, NE. 4 grandchildren: Nicole Bergerson of Omaha, NE and fiancé, Steve Westby; Travis Bergerson and wife Jennifer of Polk, IA; Jennifer and husband Mike Woznicki of Streamwood, IL; Maggie Moreno and boyfriend, Jeremy Nelson of Fremont, NE; and 6 great grandchildren. Preceded in death by her parents and husband; sisters, Roycene and Barbara; and brothers, Dean and Dal; grandson, Daniel.

The family of Maurine Filsinger created this Life Tributes page to make it easy to share your memories.

Send flowers to the Filsinger family.