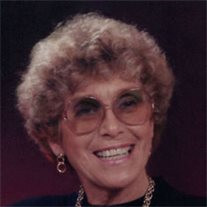 Funeral Services were held at 10:00 AM Friday, September 28, 2012 at The United Methodist Church in Neligh, NE with Pastor Carroll Plisek and Rod Heilbrun, Officiating. Music was provided by Marie Krohn and Roxanne McNally. Burial was at Tilden City Cemetery in Tilden, NE. Pallbearers were Rex Beguin, Scott Fisbeck, Craig Beguin, Kirk Beguin, Mike Fisbeck, Drew Schumacher, Cody Beguin, and Eric Shanfelt. Honorary Pallbearers are Cassi Henninger, Kristi Stanfelt, Roxie Reetz, Jacey Schumacher, Angie Hoagland, and Candie Johnson. Beyer Snider Memorial Funeral Home are handling the arrangements in Neligh. Born October 1st 1922, in Royal, NE, to Scott and Rhoda Conner, she was one of eight children. She attended and graduated from Ewing High School in 1941. On October 20, 1941 she married the love of her life, Henry Schumacher, to this marriage four children were born, Lonnie Ray, Judy, Vicki, and Fred. Marge was a devoted wife and mother; she lived in many towns as Henry's job required them to move several times. After retirement the still happily married couple returned to Neligh for their golden years where she was reunited with many friends and family. The final years of her life were spent at Pioneer Manor where she once again made many friends and touched many lives. She will be especially remembered for her love of playing cards and entertaining friends and family. Her compassionate nature made her easy to befriend and love. Margie will be deeply missed and remembered by many, but now will be united with her beloved Henry. Margie is survived by one brother, Sam Conner, two sisters, Hazel Belmer and Betty Mechaley, her children Judy (Blayne) Beguin, their children Candie, Roxie, Kirk, Angie, Rex, Craig, and Cody, Vicki (Bill) Fisbeck, their children Kristi, Scott, and Mike, Fred (Jeanne) Schumacher, their children Cassi, Drew, Jaycey, Michael, Mathew, Janea, and Erin, as well as 36 great grandchildren and one great great grandchild. She was preceded in death by her parents Scott and Rhoda Conner, her son Lonnie Ray, and sisters Ethel Hays, Gladys Nothem, Wilma Doty, and Dorothy Couch. A memorial has been established for Pioneer Manner, contributions are welcome at the Beguins, Box 661 Rushville, NE 69360.

Funeral Services were held at 10:00 AM Friday, September 28, 2012 at The United Methodist Church in Neligh, NE with Pastor Carroll Plisek and Rod Heilbrun, Officiating. Music was provided by Marie Krohn and Roxanne McNally. Burial was at Tilden... View Obituary & Service Information

The family of Margie Schumacher created this Life Tributes page to make it easy to share your memories.

Send flowers to the Schumacher family.