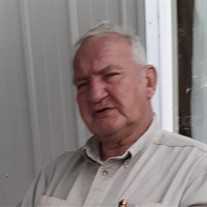 Funeral Service for Marvin E. Sands age 73 of Neligh, Nebraska will be 10:30 a.m. Wednesday, June 9, 2021 at St. Francis of Assisi Catholic Church in Neligh with Father Pat Nields, officiating. Burial will be at St. Patrick’s Catholic Cemetery rural Clearwater, Nebraska. Visitation will be Tuesday, June 8, 2021 from 5:00 p.m. to 7:00 p.m. with a 7:00 p.m. Wake Service at St. Francis of Assisi Catholic Church in Neligh. Beyer Snider Memorial Funeral Home is handling the arrangements. Marvin passed away on June 5, 2021. Condolences maybe directed to the family at www.beyersnidermemorialfh.com      Marvin Eugene Sands was born on May 20, 1948 to Anna Sands at Norfolk, Nebraska.  He attended school in Norfolk.  On June 12, 1970 he was united in marriage to Marilyn Eli at Denver, Colorado.  Marvin served in the Army National Guard from May 10, 1976 until January, 10, 1980.   Marvin was a rancher for his whole life.  He enjoyed hit/miss motors, traveling, tinkering, and anything to do with agriculture.  He belonged to Rae Valley Club.      Survived by Kelli and husband Matt Wilkinson of Oakdale, Nebraska; Chuck and wife, Shelley Sands of Neligh, Nebraska; and Matthew and wife, Marie Sands of Petersburg, Nebraska.  7 grandchildren and 6 great grandchildren.      Preceded in death by his mother, his wife, and brother John.

The family of Marvin Eugene Sands created this Life Tributes page to make it easy to share your memories.

Send flowers to the Sands family.