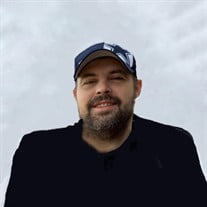 Celebration of life for Michael Eugene Thress age 37 of Madison, NE will be held from 12:00 p.m. to 8:00 p.m. on Saturday, November 13, 2021, at the Antelope Fair Ground Building in Neligh, NE. The family has asked you to wear casual superhero attire. A private family burial will held at the Bartlett Cemetery at Bartlett, Nebraska. Beyer Snider Memorial Funeral Home of Neligh, Nebraska is handling the arrangements. Condolences may be directed to the family at www.beyersnidermemorialfh.com Michael Eugene Thress, born on November 16, 1983 in Richland, Washington. He went to heaven on October 30, 2021, after a 5 month battle with cancer. He fought a hard battle but God needed him. He started school in Manhattan, Kansas, and later went to grade school in Walla Walla, Washington. He went to school in Cedar Rapids, Nebraska and graduated 2002 from High School in Osceola, Nebraska. In Michael’s junior year of high school his family had a foreign exchange student from Hungary, Laszlo Borcsok. He and Michael were very close and enjoyed their brotherhood over their 9 months together as brothers. With all of these moves he made many friends and has kept in contact with them throughout the years. After High School, Michael moved to Redmond, Oregon, with his parents. They lived there for 1 year. He then moved to San Jose, California to live with his sister. He was a game tester for Atari. It was his dream job that didn’t pay very well. He eventually moved back to Neligh, Nebraska, and lived with his parents. He lived for a short while in between with his Uncle Deano and Cousin Kris in Kennewick, Washington. He worked at the Juvenile Justice Center in Madison, Nebraska for 8 years. He then went to work at Continental in Norfolk, Nebraska for the past several years. Michael knows every gaming system and loved to watch movies. He learned to be a collector from his dad and best friend, Wayne. He collected Dragon Ball Z or anything with that on it and that was his favorite show to watch. He loved to watch WWE with his dad and go to professional wrestling matches. Michael is survived by his son, Logen Scott Thress, who was the joy and love of his life; his parents, Wayne and Diane Thress of Madison, Nebraska; his sister, Wendy (Heath) Snodgrass from Orchard, Nebraska. He was briefly married to Kaidi Ambrose, from Wakefield, Nebraska. He is also survived by his uncle Greg (Darlene) Thress from Highlands Ranch, Colorado; uncle Jeffrey Thress from Richland, Washington; great aunt Arlene (Ed) Koetje, from Seattle, Washington; aunt Linda (Dave) Hoffman from Omaha, Nebraska; aunt Gloria (Doug) Dennis from Neligh, Nebraska; Uncle Dean (Sonja) Welch from Kennewick, Washington; great aunt Doris (Welch) David from Ord, Nebraska; great aunt Evelyn (Marr) Zauner from Bakersfield, California. He is also survived by many cousins and one cannot go with mention who was like his second big sister, Cari Hoffart from Fremont, Nebraska. He was preceded in death by many family members, many of whom had cancer. The two most dramatic losses was his cousin Scott Rae Dennis in 2010, and his aunt Arlene Marie Schmunk in 2009. Aunt Randeena (Thress) Heminway in 1996. His paternal grandfather Milton Arnold Thress in 1991, his paternal grandmother Rosemary Thress in 1997. His maternal grandfather Rev. Dean Eugene Welch in 2016 and his maternal grandmother Gladys Marie (Marr) Welch in 1979. His second material grandmother, Sherrill Ann (Clark) Welch in 2016. Michael will be so missed by his family. It will be hard to go on without him in our lives.

Celebration of life for Michael Eugene Thress age 37 of Madison, NE will be held from 12:00 p.m. to 8:00 p.m. on Saturday, November 13, 2021, at the Antelope Fair Ground Building in Neligh, NE. The family has asked you to wear casual superhero... View Obituary & Service Information

The family of Michael Eugene Thress created this Life Tributes page to make it easy to share your memories.

Celebration of life for Michael Eugene Thress age 37 of Madison,...

Send flowers to the Thress family.