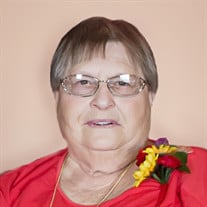 Funeral Service for Nadine F. Dredge, age 78, of Neligh were 10:00 a.m. Thursday, August 30, 2018 at Snider Memorial Funeral Home in Clearwater, NE, Pastor Kuhfal, officiating. Visitation were Wednesday, 5:00 p.m. to 7:00 p.m. August 29, 2018 at Snider Memorial Funeral Home in Clearwater. Burial will be at a later date. Nadine passed away at her home on Thursday, August 23, 2018. Snider Memorial Funeral Home is handling arrangements. Nadine Fedilis (Rice) Dredge was born on August 4, 1940 to Henry “Hank” and Helen (Reefe) Rice at Royal, Nebraska. She grew up in the Royal and Clearwater area. She graduated with the Class of 1957 from Clearwater High School. On June 29, 1959 she was united in marriage to the love of her life Lyle D. Dredge at Clearwater, NE for 59 years. They made their home north of Neligh for 53 years by each others side. She helped Lyle with the farming, milking cows, planting, and haying and whatever needed to be done; but she was in charge of her chickens. She enjoyed taking vacations, seeing her kids and grandkids, playing cards and going gambling. She was a very caring, kind, giving and loving lady to everyone. Survived by her husband, Lyle. Her children: Gwen (Gene) Schilousky of St. Paul, NE, Pam (Roger) Wells of Randolph, NE, Gaylen Dredge and friend Kay McKay of Neligh, NE, LuAnn Dredge of Osceola, NE, and Wanda (Darek) Hoefener of Overton, NE. 20 grandchildren and 34 great grandchildren. Brothers, Bob (Louise) Pick of Ogallala, NE, and Mike (Cindy) Rice of Neligh, NE. Sister-in-laws, Bev Rice of Silvis, IL, Marla Rice of California, and Dorothy Jones of Neligh, NE. Many nieces, nephews, and extended family. Preceded in death by parents, brothers, sisters, nieces, and nephews, great grandkids, and cousins.

The family of Nadine F. Dredge created this Life Tributes page to make it easy to share your memories.

Funeral Service for Nadine F. Dredge, age 78, of Neligh were...

Send flowers to the Dredge family.