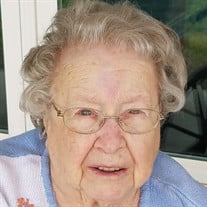 Funeral Services for Norma Jean Wilcox age 92, of Fall City, Ne will be 1:00 p.m. Monday, May 20, 2019 at Snider Memorial Funeral Home in Clearwater with Pastor Daniel Feusse, Officiating.  Burial will be in Clearwater Cemetery.  Norma Jean passed away Friday, May 17, 2019 at Community Memorial Hospital in Fall City with her 3 children, daughter-in-law and grand daughter Natalie by her side.   Condolences may be directed to the family at www.snidermemorialfh.com Norma Jeane Wilcox was born at Clearwater, Nebraska on August 18, 1926. She was the third of ten children born to Archie and Ruth (Jones) Wolfe. Norma grew up on a farm and attended country school southwest of Clearwater. She graduated from Clearwater High School in 1944. After graduation, she taught school until she joined Joyce Arden Wilcox in holy matrimony on June 26, 1946. They lived in various towns until they settled in Clearwater where they raised their three children – Jim, Joel and Julie. After being a stay at home mother for several years, Norma and Joyce owned and operated the Westside Café in Clearwater. In 1966, she was hired to be the head cook in the new Clearwater School Cafeteria. All of the coaches called her Cookie because she always had fresh baked cookies for them. She retired in 1991 from being the head cook after 25 years of service. When she retired, she continued to love cooking and baking for others. Quite often someone in Clearwater would need some baked goods for an event and they would ask her to bake what they needed, whether it was cookies, cakes, cinnamon rolls, donuts or pies. Norma’s other favorite pastimes included crocheting, working crossword puzzles, playing cards, reading paperback novels and spending time with her four grandchildren. She was a member of Concordia Lutheran Church and enjoyed her participation in the church’s Ladies Aid Association. She moved to Falls City, Nebraska in June of 2014 and lived at the Falls City Healthcare Center until she passed away on May 17, 2019 at the Community Memorial Hospital in Falls City. Norma is survived by her sons: Jim Wilcox of Falls City, NE; Joel and Tammy Wilcox of Lincoln, daughter Julie Wilcox of Falls City, NE; Grandchildren and Great Grandchildren: Christopher, Kathi Jo, Matya and Kiera Wilcox of Falls City, NE; Matthew, Michelle, Jordan, Tate and Brit Wilcox of Falls City, NE; Natalie, Paul, Luke and Cody Bakan of Yuma, AZ; Amanda Wilcox of Cape Coral, FL. Brother: Glenn (Buster) Wolfe ; Sister: Maedean Peters and a host of nieces, nephews and friends. She was preceded in death by her husband, parents, granddaughter and great grandson, brothers and sisters. She is now rejoicing in the glory of God in the Kingdom of Heaven.

The family of Norma Jeane Wilcox created this Life Tributes page to make it easy to share your memories.

Send flowers to the Wilcox family.